‘I threw until I couldn’t anymore’: Sabathia 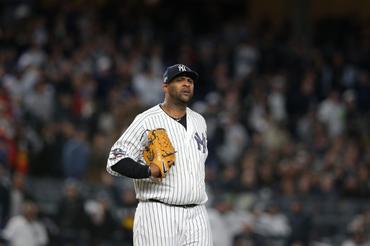 NEW YORK (Reuters) – After a career plagued with injuries, New York Yankees pitcher CC Sabathia said it was perhaps fitting that his near two-decade-long career ended with his aching left shoulder giving up the fight.

The Yankees dropped left hander Sabathia from their American League Championship Series roster on Friday, a day after the 39-year-old winced in pain as he walked off the mound in the eighth inning of Game 4 of the series against the Houston Astros.

“I think it’s just kind of fitting. I threw until I couldn’t anymore,” Sabathia, who had received a cortisone shot two weeks ago on the shoulder, told reporters.

After being beaten 8-3 by the Astros, the Yankees said Sabathia had suffered a “subluxation of his left shoulder joint (partial dislocation)” and would be replaced on the roster by Ben Heller. The Astros lead the series 3-1.

His removal from the ALCS roster means Sabathia will be ineligible to compete in the World Series even if the Yankees storm back to win the playoff series.

Sabathia, who played for the Yankees for 11 seasons, said that hearing the fans cheer for him as he left the mound on Thursday made him feel like he “made the right choice 11 years ago.”