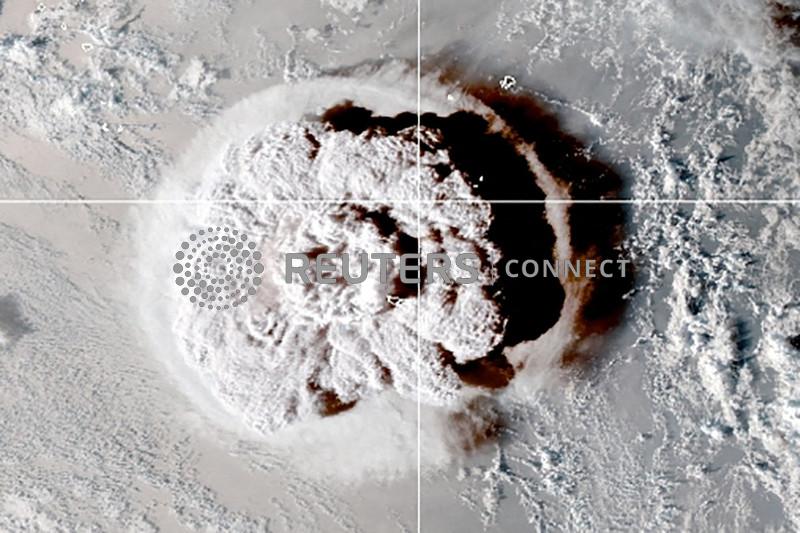 The eruption of an underwater volcano off Tonga, which triggered a tsunami warning for several South Pacific island nations, is seen in an image from the NOAA GOES-West satellite taken at 05:00 GMT January 15, 2022. CIRA/NOAA/Handout via REUTERS

Remember us in your prayers.

That’s the plea from former Fiji journalist Iliesa Tora who fled for safety with his family and others after the underwater Hunga-Tonga-Hunga- Ha’apai volcano eruption yesterday afternoon.

Tora said they were terrified by what had transpired because it was the first time for them to experience such events.

He said the rumbling sounds from the volcano were too scary.

A tsunami hit Tonga’s largest island Tongatapu after the underwater volcano erupted, causing windows to rattle, houses to shake and ash was in the wind.

Waves associated with the continuous volcanic eruption crashed into Tongatapu and forced residents to evacuate their homes.

In his social media Facebook live video, Tora said explosions were heard and black clouds of smoke seen in the sky followed by abnormal tidal movements and large waves.

He said a similar incident had occurred several years ago but was not of the same magnitude.

“Something similar happened seven years ago, but it wasn’t this bad,” Tora said.

He said his family and others were advised to move to higher grounds by local authorities.

“An explosion erupted from underneath the sea near Ha’apai and we were given a tsunami warning.

“All the roads in Nukua’lofa have been busy as authorities try to move us to a safer place.”

Tora said extrusive igneous rocks showered through the area while they drove to safety.

“Small rocks from the volcanic eruption started to fall like rain as a result of what happened.”