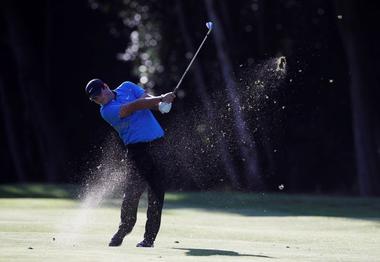 SYDNEY (Reuters) – Marc Leishman thinks Patrick Reed’s rules violation at the Hero World Challenge has given the Melbourne crowd plenty of ammunition to try and get under the American’s skin at next week’s Presidents Cup.

Reed was penalized two strokes on Friday after twice moving sand while taking practice swings to improve his lie at the invitational tournament in the Bahamas hosted by Tiger Woods.

Former professionals commentating on American television were aghast at Reed’s breach of golf’s hallowed etiquette and his action triggered a series of memes on social media, many featuring people shoveling sand.

Australian Leishman, a member of the International team taking on a United States side featuring Reed and captained by Woods next week, said he had not been impressed by the incident.

“Yeah, I did see it and it looked pretty ordinary, to be honest,” he told reporters at the Australian Open on Saturday.

“That’s probably all I’ve got to say about that. It didn’t look too good for him.”

Leishman stopped short of suggesting fans at Royal Melbourne bring shovels to taunt the American when the biennial team competition gets underway on Thursday, but did think the incident could expose Reed to some derision from the galleries.

“There are opportunities there, put it that way. Maybe not shovels, but I think he’s definitely opened a door there, that he’s brought on himself,” he said.

“As long as it’s not disrespectful, I think. You never want to cross the line, but I think there is some pretty good ammo there, isn’t there?”

The Australian crowds were accused by some International players of being awestruck by Woods and the American team when the Presidents Cup was last played at Royal Melbourne in 2011.