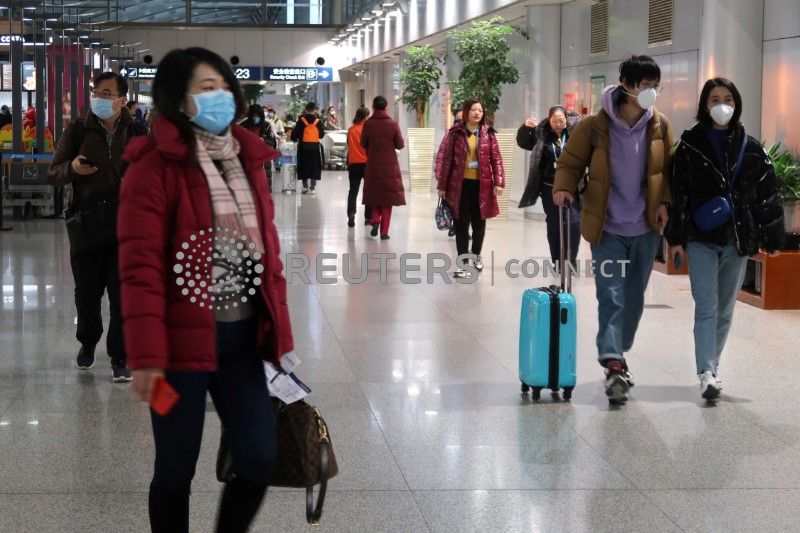 Here’s an explainer on the airline industry’s response to the outbreak so far and its potential financial exposure compared to SARS in 2003, which killed nearly 800 people:

WHAT IS THE EXPECTED FINANCIAL IMPACT ON AIRLINES?

The biggest concern is a sharp drop in travel demand if the virus becomes a pandemic.

During the height of the SARS outbreak in April 2003, passenger demand in Asia plunged 45%, according to the International Air Transport Association (IATA).

The industry is now more reliant on Chinese travellers.

For example, in Australia, Chinese travellers account for more than 15% of international arrivals, up from just 4% in 2003, according to Moody’s ratings service.

Those travellers, who arrive mostly via mainland carriers, often take domestic flights once they arrive in Australia, pointing to the potential for knock on effects for the likes of local airline Qantas Airways Ltd <QAN.AX> if there is a fall in travel demand.

Since 2003, the number of annual air passengers has more than doubled, with China growing to become the world’s largest outbound travel market.

In 2003, 6.8 million passengers from China travelled on international flights, and that number has grown by close to 10 times to 63.7 million in 2018, according to data from the country’s aviation authority.

Global airline industry revenues more than doubled to $838 billion in 2019 from just $322 billion in 2003, according to IATA data.

“Whether only one secondary market, an entire country or the wider region is impacted is obviously unpredictable and outside of the industry’s control,” said Brendan Sobie, an independent aviation analyst in Singapore.

WHICH AIRLINES ARE HEAVILY EXPOSED?

Many airlines, including Korean Air Lines <003490.KS>, Singapore Airlines’ budget carrier Scoot, Taiwan’s China Airlines Ltd <2610.TW> and Japan’s ANA, announced they were cancelling flights in and out of Wuhan after authorities announced a lockdown.

Flight tracking website FlightRadar24 showed that as of 0600 GMT on Thursday, 184 Wuhan flights, or 60% of the departures listed for the day, had been cancelled.

ARE PASSENGERS CANCELLING TRIPS TO CHINA?

Rajeev Kale, country head for Thomas Cook India’s holidays division, said some customers were raising concerns about travelling to China. “Most of our customers are adopting a wait and watch approach to see further developments,” he said.

Philippine Airlines, Garuda Indonesia <GIAA.JK> and Japan Airlines said there was no slowdown in bookings to and from China yet, while low-cost Filipino carrier Cebu Pacific said some passengers had expressed concerns about whether it was safe to fly but had not cancelled bookings.