From the Editor-in-Chief’s desk: Your November 28 briefing 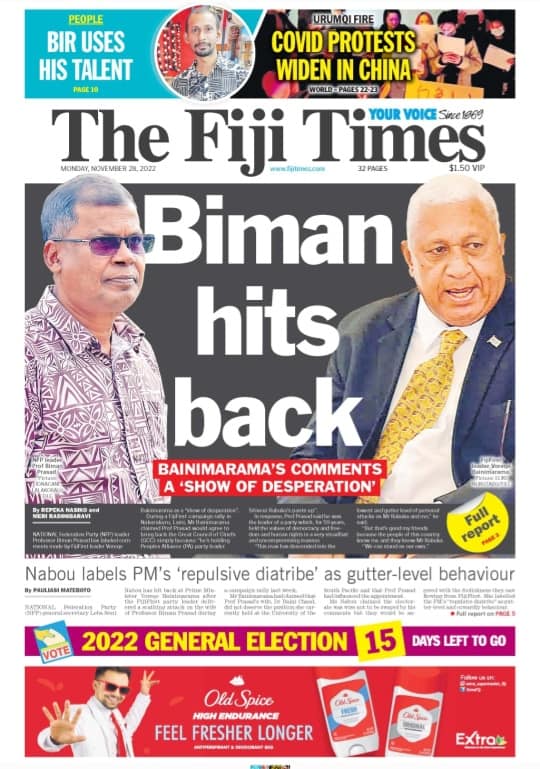 The big ones on the front page are on politics. As the parties raise the intensity of their campaigns, we see the battles are getting hot.

Here are some headlines inside:

THE Fijian Elections Office has asked the People’s Alliance (PA) party to remove a video addressing the Denarau land deal from its Facebook page. In a statement, the FEO said it received a complaint on the video published by the People’s Alliance in which Y3 Kofera Trust chairman Ratu Vuniani Navuniuci was purporting to be the Tui Nadi.

RESIDENTS living along Vakabalea Road, Navua, have raised serious health and safety concerns about the dust and noise nuisance caused by trucks carting either soft stone or gravel along the thoroughfare on an almost daily basis.

A LANDOWNING unit in Macuata is pleading with Government to stop gravel extraction works on their land, amidst claims they have witnessed illegal activities which are not part of the agreed terms.

WATER woes continue to plague residents along Princess Road as they have been without water for the past six days.

REPORTS of child rape this year has increased to 70 cases compared to 24 cases reported last year.

MEMBERS of the public are being urged by police to consume alcohol responsibly as the country enters the festive season. This, after a 36-year-old woman was alleged to have stabbed a man several times during a drinking party in Kashmir, Lautoka, over the weekend.

A TOTAL of 606,092 voters will be eligible to vote on December 14. This was confirmed by Supervisor of Elections Mohammed Saneem during a briefing over the weekend. Mr Saneem also confirmed that at the conclusion of the postal vote verification process, the Fijian Elections Office (FEO) had received 9916 postal vote applications. 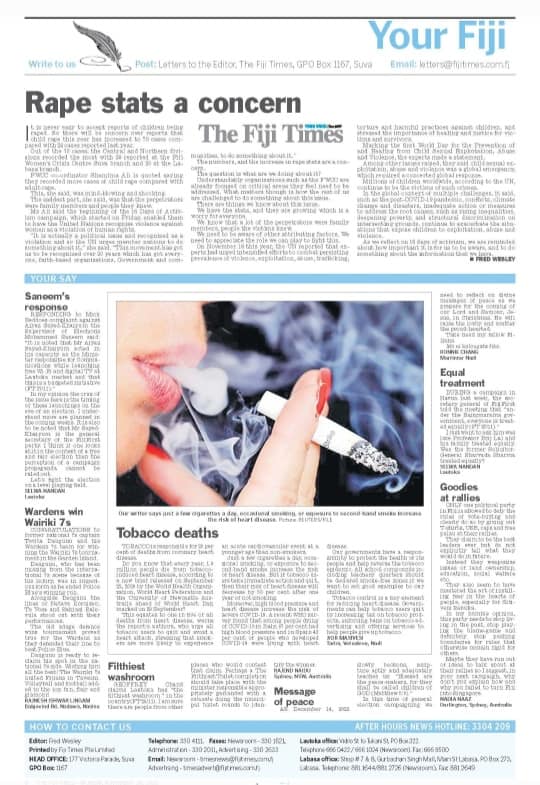 BA defeated Nadi 1-0 in the All in One Builders-sponsored Pacific Community Cup at Prince Charles Park in Nadi yesterday.

FIJIAN Drua hooker Tevita Ikanivere scored a try for the Barbarians but it was not enough to beat English club Northampton Saints in England yesterday.