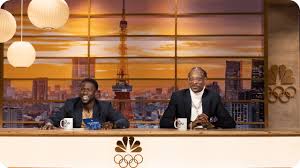 “Get out of his way, boom,” Hart remarked as he ran a commentary as they played the footage of Asaeli Tuivuaka’s try against New Zealand in the gold medal match.

The hosts both swayed as the boys chorused after the win.

“Rugby is big over there,” the ‘Drop it like it’s hot’ singer added.

“These celebrations don’t just happen on the field but they happen off the field as well,” Hart said.

“When Fiji won the gold in rugby, the entire island nation celebrated along with them,” he added as the video was played of a celebration dance from Nawaka in Nadi – the video had gone viral on social media the night Fiji won.

While the footage played, Snoop Dogg got up from his seat and pulled a few moves of his own, while Hart ran his own musical commentary in rhythm with the cheering and dancing captured in the amateur video footage.