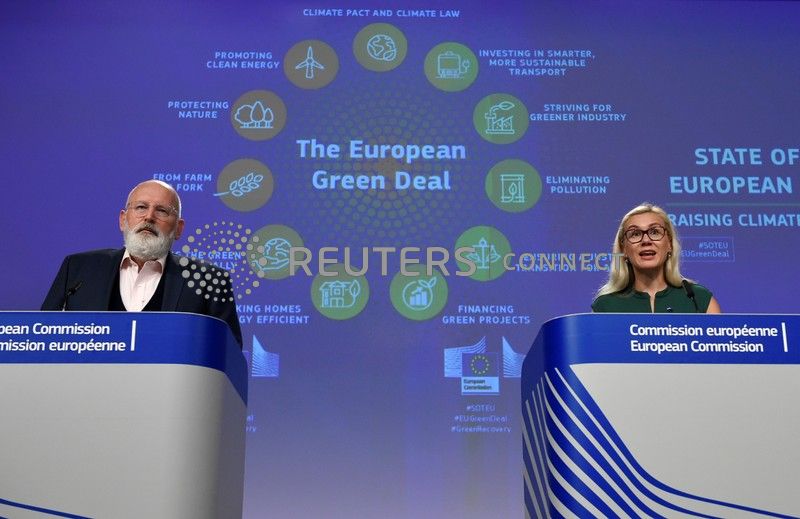 European Commission Vice President Frans Timmermans and EU Commissioner for Energy Kadri Simson give a joint press conference on the EU's climate ambition for 2030 at the EU headquarters in Brussels, Belgium September 17, 2020. John Thys/Pool via REUTERS

BRUSSELS (Reuters) – The European Union needs to hike its renewable energy and energy saving targets, according to its analysis published on Thursday of how the bloc could make deeper emissions cuts this decade.

The European Commission wants the EU to slash its greenhouse gas emissions by at least 55% by 2030, against 1990 levels, which experts say is the minimum needed to reach net zero emissions by 2050.

The tougher target has stirred resistance from industry and countries worried about the costs. The EU’s current 2030 emissions target is for a 40% cut, though the bloc is on track for a deeper 45% cut.

On Thursday the Commission insisted that the tougher goal is economically feasible.

The Commission laid out other steps that could drive decarbonisation – including tighter EU emissions standards for cars, adding shipping and possibly road transport and buildings to the EU carbon market, and reviewing fossil fuel taxation, confirming draft plans previously reported by Reuters.

It will table specific policy proposals by next summer.

It said expanding EU carbon pricing would help shore up funds as an additional energy investment of 350 billion euros a year from 2021 to 2030 would be needed, compared with the previous decade.