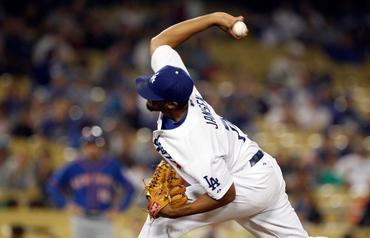 Los Angeles Dodgers closer Kenley Jansen reported to camp on Sunday and revealed that his delay was due to a battle with the coronavirus.

The 32-year-old Jansen said he believes he caught the coronavirus from his 4-year-old son, Kaden, about three weeks ago. Kenley Jansen initially tested negative before testing positive in a follow-up exam.

Jansen said his wife and his two other children also caught the coronavirus after Kaden was diagnosed with COVID-19. Kenley Jansen said he began feeling better on his fourth day with the illness.

“It’s definitely scary and definitely a disappointment,” Jansen told reporters during a video teleconference. “When my son had it, it was more the disappointment of, ‘Why does my son have it and why not me?’ You just don’t want that to happen to one of your kids. Next thing you know, we all got it. It is scary, man. But at the same time, you have to keep the faith and just fight it.”

Jansen also had a message for the public during a time when the pandemic is raging out of control in many states and the nation’s death toll exceeds 135,000.

“It is real,” Jansen said. “Everyone in the world, take it serious. Wear your mask at all times, if you can. Because, trust me, it happens so fast. Once my son got it, I’ve seen how fast it can spread. We tried to do everything, but we all got it in the house.”

Jansen said he was worried about catching the virus from the outset due to his history of heart issues.

Jansen underwent a 5 1/2-hour ablation procedure in November of 2018 to fix a defect that triggered an irregular heartbeat issue in the high altitude of Denver, Colo., three months earlier.

Jansen also underwent an ablation after the 2012 campaign after experiencing irregular and rapid heartbeat issues.

“I tried to be careful, do everything we could do to try to avoid this virus,” Jansen said. “It happened so fast.”

All through his family’s fight, Jansen knew he wanted to play this season and the three-time All-Star said he didn’t consider opting out.

“I always wanted to play,” Jansen said. “I love this game. I wanted to do it for the fans. We’re all going through a tough time right now in this world together. I think this is a good thing, not only for Dodger fans but all baseball fans around the world who have something to watch on TV.”