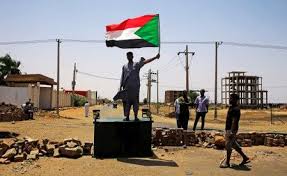 FILE PHOTO: A Sudanese protester holds a national flag as he stands on a barricade along a street, demanding that the country's Transitional Military Council hand over power to civilians, in Khartoum, Sudan June 5, 2019. REUTERS/Stringer/File Photo

KHARTOUM (Reuters) – A campaign of civil disobedience to demand civilian rule left the streets of Sudan’s capital Khartoum largely deserted as the working week began on Sunday, while a 20-year-old man was shot dead in Omdurman, witnesses and opposition medics said. Opposition and protest groups had called for workers to stay at home after […]