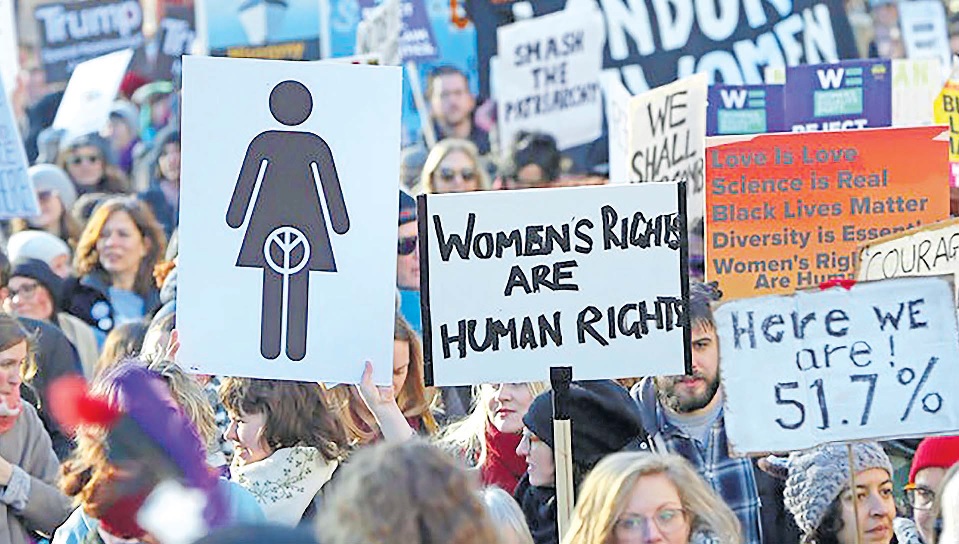 Women are still marginalised and live in fear for their safety either directly or indirectly in an unequal world dominated by the patriarchy.

They face uneven treatment in areas of scholarship, business, political power, and are hindered by multiple barriers that men wouldn’t normally face when they try to progress further in these areas.

The World Economic Forum’s Gender Gap Report 2021 reported that Fiji was ranked 113 out of 156 in the Global Gender Gap Index.

Of note, Fiji was also ranked 95 and 127 in terms of political empowerment and economic participation, respectively, which should be of concern to everyone.

Why hasn’t there been a concrete advancement towards achieving gender equality in Fiji?

When women choose to retaliate against this uneven power dynamic, they are bombarded with sexist comments that try to justify male dominance, and in the worst cases, some men resort to physical or sexual abuse to assert this dominance — something that is unfortunately common in Fiji.

In 2020, “the Fiji Police Force recorded 1545 cases of assault-related offences against women… and 99 cases of sexual offences”.

These alarming statistics clearly show how women in Fiji do not live free lives, and still face violence despite any efforts put in by relevant authorities.

It remains one of the major barriers in Fiji that limit the progress towards true gender equality.

When people usually think of sexism, they typically associate it with what social psychologists refer to as hostile sexism.

Hostile sexism is often very direct with negative stereotypes and evaluations aimed at a gender group, usually grounded in misogyny.

For instance, saying that “women belong in the kitchen, and have no place in the cut-throat corporate world” is classified as hostile sexism.

Another example is when certain men believe that some women actively seek to sexually bewitch men and keep them on a tight noose.

Likewise, another example is “saying that women are too easily offended”.

These sexist remarks usually emerge as a defence mechanism to protect the status quo and egos of men who feel it is endangered by a woman.

As some men would imply, it is a desperate attempt to “keep women in their place”, and this is where the multitude of problems arise like domestic violence, sexual harassment, and workplace discrimination.

Benevolent sexism is defined as positive stereotypes, and evaluations of gender, usually delivered in a complementary manner, but establishes both groups in traditional gender roles.

It has the same oppressive effect as hostile sexism, but the reason that it comes off as a friendly compliment is why it is so internalised in society and is often endorsed by men and women alike.

Benevolent sexism indirectly causes society to adhere to stereotypical gender roles by often claiming that men are more rough, rational, and ambitious, and women are more emotional, caring, delicate, and need to be cherished by men.

Saying that women are more compassionate penalises other women who are assertive, and therefore would come off as ‘bossy’.

For instance, if a man denies assistance in performing a task at the workplace, he is considered independent, and capable of solving the problem on his own.

In contrast, if a woman were to deny assistance, she would come off as cold-hearted, and ‘less feminine’ in that she submissively did not accept external help.

But if she accepts the help, she can also come off as incompetent – see the problem here?

It may come off as a compliment, but it presents a damaging stereotype for both groups, that restricts them to traditional gender roles.

Yes, it hurts the men too. By supposedly claiming that women possess these types of qualities, it penalises men who may lack qualities of strength, ambition, brutishness or even penalise the men who try to cultivate qualities like compassion, creativity, and gentleness.

“Be a man” or “don’t be such a girl” is what these men would hear if they tried to express these qualities.

Imagine being a woman at the workplace who is only complimented on her looks, and never her work.

Imagine being a woman who is only given the task of organising company picnics, and stuff lunches, and never the opportunity of leading a project or negotiating with a high-value client since she is stereotypically perceived as having good organisation skills.

Benevolent sexism tries to put women on this imaginary pedestal, as beings of purity, beauty, and compassion while restricting them from jobs and roles that require qualities that are usually different from the ascribed gender ideals.

It acts as a blockade in career advancement where women’s ambitions are diverted away from male-dominated industries to more traditional, and feminine roles.

In the worst case, women who endorse benevolent sexism are more likely to believe that career ambitions would make them less attractive to other men.

Another important consequence of benevolent sexism is how it hinders any chance of collective action against policies or events that discriminate against women.

Given that some women bath themselves in the seemingly positive compliments, they legitimise benevolent sexism and give men a basis to establish male dominance and female submission.

The women who seem to go against these gender norms and challenge the status quo are viewed negatively by other women who endorse benevolent sexism.

If women do not collectively retaliate against this problem and see this uneven status quo, then men will not have an incentive to reflect on their benevolently sexist ideals, and the cycle will continue indefinitely.

The same people who endorse benevolent sexism, are also more likely to validate hostile sexism. This is particularly of concern to Fiji given the prevalence of hostile sexism, and violence against women.

An implication of this is that it lowers the chances of improving the level of objective gender equality in Fiji. This widening gap in gender equality then prolongs the effects of gender-based violence and domestic violence.

What can we do?

The issue with Fiji is that it is a conservative society that is built upon traditional gender norms that is evident in both iTaukei and Fijians of Indian descent families.

Ageism also continues to be a barrier in diminishing the level of equality among genders in Fiji.

Out of respect, most minors are not allowed to question the decision and laws mandated by elders about gender roles.

The process towards achieving some level of gender equality is complex and requires systematic solutions. Acknowledging, and acting out on, benevolently sexist remarks is the first step towards establishing a basis for equal opportunity for women.

Staying silent or being bewitched by the seemingly positive evaluations of an ideal woman seems to aggravate this even further.

Parents should also attempt to divert away from traditional gender beliefs and adopt a more progressive outlook – one that doesn’t put men in a dominant role and women in a subordinate position.

The problem isn’t about the death of chivalry, but the expectation of men to always provide, and women to submissively expect from them. No, holding the door open for a woman would not count as an act of oppression.

An uneven status quo that is perpetuated by a system of marginalisation, aided by these seemingly positive evaluations, does.