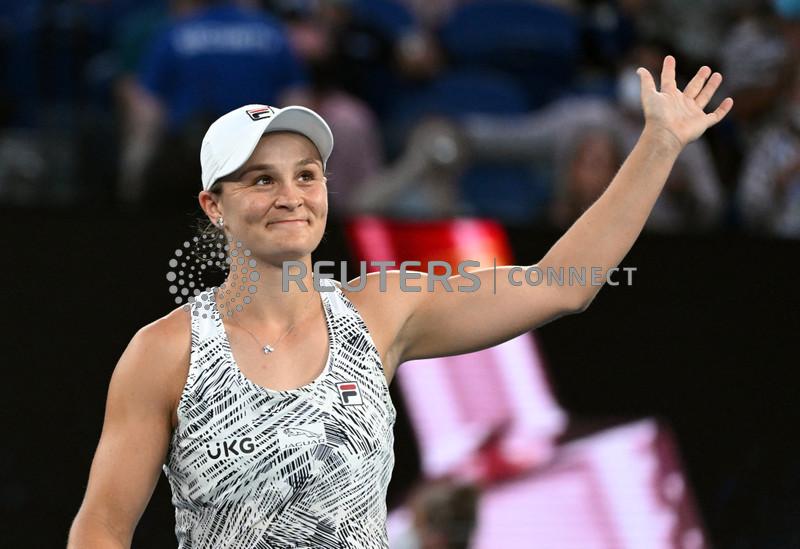 Ash Barty will live out a childhood dream when she plays American Danielle Collins in the Australian Open final at Melbourne Park after a stunning 6-1 6-3 semi-final triumph over Madison Keys.

Seeking to become the first local since Chris O’Neil in 1978 to win the Australian Open, the 25-year-old was dominant once again as she thrashed American Keys.

“To be in the finals weekend of your home Grand Slam is what a lot of Aussie players dream of,” she told reporters.

“It’s going to be an incredible experience come Saturday. I can’t wait to go out there and enjoy it.”

Keys started the semi-final with a stinging forehand winner, but Barty was able to break her serve in a tight opening game and was largely in control from there on.

She did not drop a point on serve until 4-1, and was able to serve an ace when faced with a break point in that game before wrapping the set up in less than half an hour.

The American started to find her range in the second set and was able to challenge the Australian’s dominance.

There were some formidable points, with Keys thumping ground strokes and Barty moving well to defend.

Her variety, and particularly the heavily-sliced backhand, ultimately came to the fore, with Keys unable to make any traction in Barty’s service games.

It is the first time the Wimbledon champion has reached the Australian Open final, with one semi and two quarter-final appearances in the last three years.

The expectation surrounding her bid to end a local drought dating back 44 years has been significant, but the world number one said she was embracing the hopes of fans.

“(You) absolutely embrace it. You have to. It’s fun. It’s brilliant to be playing in the business end of your home Slam. I’m not going to lie about that. It’s amazing,” she said.

“It’s been an incredible January, an incredible summer for us. I’m really looking forward to having one last crack here to really go out there and enjoy it.”

Barty is unbeaten in 2022 after starting the season with a win in the Adelaide International. Her form in Melbourne over the past fortnight has been dominant.

Steffi Graf dropped 16 games on the way to the Australian Open final in 1989. Monica Seles dropped 20 games when reaching the 1993 decider. Barty has dropped 21 games en route to this year’s final.

Keys was also unbeaten heading into the semi-final after starting the season with a triumph in a different tournament in Adelaide in the week before the Australian Open.

But she was unable to match the two-time Grand Slam champion after surrendering a break in her opening service game.

Keys was also beaten by Barty when the Australian claimed her first major title at Roland Garros in 2019 and believes the right-hander is an even better player now.

The American feels that Barty has elevated her game above her peers and, in an ominous sign, is also capable of reaching an even higher level.

“I definitely think so,” she said.

“She seems very focused, but she’s playing very within herself, and it just seems like everything is really working for her right now without playing unbelievable tennis for her.

“I think the rest of us are watching it thinking, ‘Wow, this is incredible’, but when you watch her, she seems completely in control of all of it.”