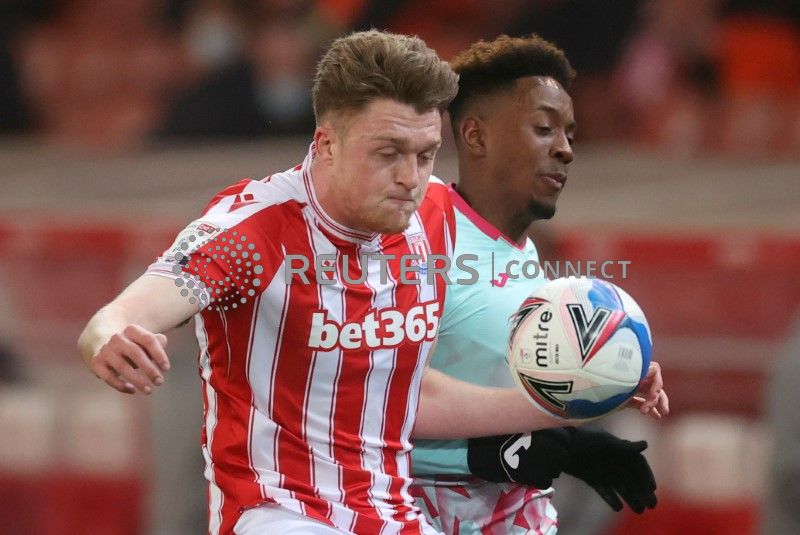 MELBOURNE (Reuters) – With his brother having earned three caps for Scotland, Harry Souttar’s decision to play for Australia raised eyebrows in his homeland but is paying dividends for the Socceroos as they plot their route to the World Cup in Qatar.

The towering Stoke City centre back nodded in his sixth goal in five internationals on Tuesday, securing a 1-0 win over Jordan in Kuwait City that gave Australia eight successive victories in World Cup qualifying for the first time.

Having already wrapped up top spot in Asia’s Group B, Australia will advance to the third phase of qualifying in September confident of booking a ticket to a fifth successive World Cup.

Souttar, however, has more immediate goals.

As a 22-year-old eligible to play at the Olympics for Tokyo-bound Australia, he hopes his run of form might mean a spot on the flight to the Games.

“Hopefully I’m selected and we go there and just give it our all and make Australia proud,” said the 1.98m Souttar, the second tallest man to play for the Socceroos after former goalkeeper Zeljko Kalac.

Souttar grew up in a football-mad family in Luthermuir, a small village between Aberdeen and Dundee, and represented Scotland at junior levels like his older brother John, who plays as a centre back for Hearts in the Scottish Premiership.

Their father played semi-professionally for Scottish side Brechin City, while their mother was born in the mining hub of Port Hedland in Western Australia.

Australia’s scouts have mined Scotland for talent for a number of years, luring Hibs winger Martin Boyle ‘Down Under’ in 2018, so they were quick to swoop when Souttar agreed to meet for a cup of tea in Blackpool.

Souttar made an immediate impression on Graham Arnold, who picked him in his Olympic squad in 2019 and then gave him his first full international cap months later against Nepal at the start of Australia’s World Cup qualifying.

Having only arrived in Australia a few days before the game, Souttar scored a brace in Canberra against the Nepalese and another double against Taiwan less than a week later.

The COVID-19 pandemic meant Australia and Souttar went without a single international for 18 months until this month’s camp in Kuwait, but both have picked up where they left off.

His 75th-minute header on Tuesday, latching onto a cross from Boyle, finally broke open a stubborn Jordan defence to ensure Australia head into the next phase with momentum.

“We came into this camp in Kuwait and that was our goal, to win all eight (qualifiers),” said Souttar, red-faced from the Middle East heat.

“And that’s what we’ve done.

“You can just see I’m so, so delighted.”