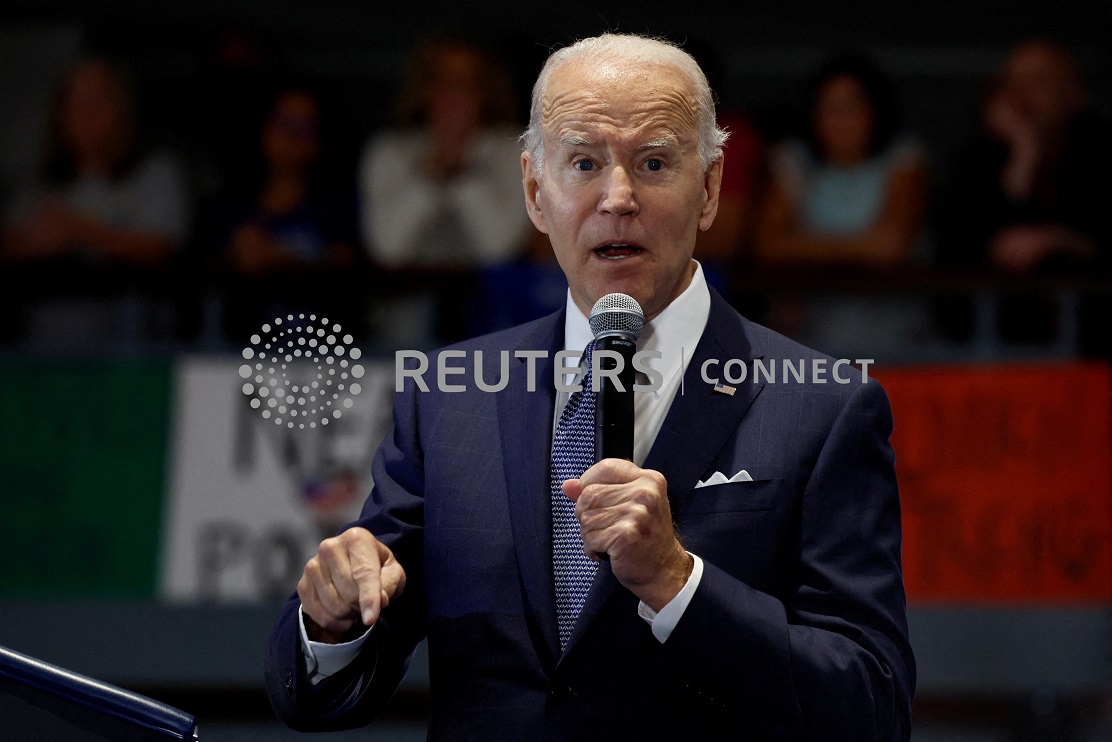 After a two-day Washington summit, the United States and leaders and representatives from 14 Pacific island states issued a joint declaration resolving to strengthen their partnership and saying that they shared a vision for a region where “democracy will be able to flourish.”

Those endorsing the document included the prime minister of the Solomon Islands, Manasseh Sogavare, whose government had earlier indicated it would not sign the declaration, heightening concerns about his ties to China.

The summit was the first time the United States has hosted so many leaders of a region it has considered a maritime backyard since World War Two but into which China made steady advances.

Biden pledged “to more effectively coordinate with our allies and partners around the world to better meet the needs of the people across the Pacific.”

He vowed to make a priority of strengthening the U.S. partnership with the island countries and help them address the “existential threat” posed by the climate crisis, their highest priority.

RAND Corporation Indo-Pacific analyst Derek Grossman said Washington had let ties with the region languish for decades, but the summit showed this had changed.

Biden made no mention of China in brief public remarks but said: “The security of America, quite frankly, and the world depends on your security and the security of the Pacific islands.”

Chinese foreign ministry spokesperson Mao Ning, responding to a question on Biden’s remarks, said on Friday that China had an “open attitude” towards countries wanting to strengthen cooperation with Pacific Island countries.

However, Mao emphasized that these countries should not be used as pawns in competition between great powers.

“We hope the U.S. side can sincerely and whole-heartedly provide support to the Pacific island countries in responding to climate change and realizing vigorous development, rather than using cooperation as cover to engage in geopolitical chess games,” Mao said during a regular media briefing in Beijing.

“Increasingly, those impacts include pressure and economic coercion by the People’s Republic of China, which risks undermining the peace, prosperity and security of the region, and by extension, of the United States,” it said.

The summit declaration said Washington would work with the island countries through the Pacific Island Forum, where it is a dialogue partner, saying the group had an important role to unite the region. China earlier this year failed to split 10 of 18 forum members into a separate security and trade deal.

China says its ties with Pacific island countries are based on mutual cooperation, that the region is not the backyard of any country and that Washington’s attempts to stir up opposition to Beijing there will fail.

Some of the nations have complained about being caught in the middle of the superpowers’ battle for influence.

The White House said the United States would invest more than $810 million in expanded programs to aid the islands, on top of over $1.5 billion provided in the past decade. It includes a previously announced 10-year $600 million aid request to Congress to build climate resilience and maritime security for the island states.

“It sounds a lot, but when it’s divided up across so many government areas, nations and territories it doesn’t look so substantial.”

It has also agreed to provide $2.8 million to step up FBI training with Pacific islands, including in 2022 with the Solomon Islands, which alarmed the United States and its allies earlier this year by signing a security deal with China.

That deal included provisions for Chinese police to help maintain social order and fueled concerns about Chinese militarization of the region.

Thursday’s joint statement addressed U.S. nuclear testing in the Marshall Islands in the 1940s and ’50s.

“We, too, acknowledge the nuclear legacy of the Cold War. The United States remains committed to addressing the Republic of the Marshall Islands’ ongoing environmental, public health concerns, and other welfare concerns,” it said.

The State Department had objected to an explicit reference to the Marshall Islands nuclear issue when negotiating the declaration earlier in the week, sources told Reuters. The issue has been a sticking point in U.S. talks to renew economic assistance to the country, which houses crucial U.S. military facilities.

The statement acknowledged the importance of international law and the United Nations Convention on the Law of the Sea on freedom of navigation and overflight.

The Solomon Islands last month put a moratorium on foreign navies making port calls, raising concerns in this area among the United States and its allies.

The U.S. strategy document pledged that the United States would help ensure Pacific governments and people “have the autonomy and security to advance their own interests.”

As part of the plan, Washington would increase its regional diplomatic and defense presence, collaborate with partners on submarine cable upgrades and promote “secure and trusted” telecommunications partnerships.

Washington this year vowed to open embassies in Kiribati, Tonga and the Solomons.