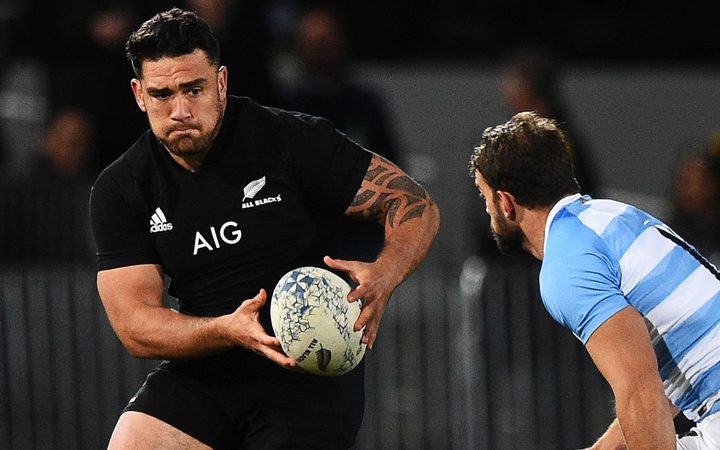 Codie Taylor playing against the Pumas in Nelson. Photo: Photosport

All Blacks Codie Taylor and Josh Ioane have made a public stand against racism by posting a “black square’’ on their social media accounts.

The pair felt compelled to join the protest movement following the death in police custody of George Floyd in Minneapolis last week, and in doing so have urged others to show compassion and tolerance for people from all walks of life.

The #BlackoutTuesday hashtag has been posted by social media users around the world, and Taylor and Ioane said they felt compelled to use their positions as professional rugby players to join the fight against discrimination.

“Personally, I think it’s everywhere,” 50-test veteran and Crusaders hooker Taylor said. “Racism isn’t just in America, it is all around the world.

“I think it’s awesome people, public figures, are really trying to step out and make it more of an awareness so that we can change. I am of Maori descent, but am also of Pakeha descent, so am in the middle in a sense.

“But I know a lot of people do struggle with it.’’

Ioane, who played his first and only test to date for the All Blacks against Tonga last year, did his research before uploading the black square onto his Instagram account.

“I did read up a little bit on that black solidarity stand. I have been following the George Floyd (situation),’’ Ioane said.

“I guess my reasoning for posting was just to support the movement of stopping racism all over the world. And, I guess, create an awareness around racism.’’

Taylor and Ioane aren’t the first high-profile athletes to address the issue in the public sphere.

New Zealand UFC star Israel Adesanya, who was born in Nigeria but fights under the Kiwi flag, made an appearance at the Black Lives Matter protest in Auckland last Sunday, and delivered an emotional speech by saying he was “p…ed off’’ at the prejudice against black people.

While Ioane’s protest was more subtle, he made it clear he had no regrets. Following the death of Floyd, 49, there have been marches and riots in the United States. Rallies have also been staged in many countries around the globe.

“I definitely see those athletes leading the way with that stuff,’’ Ioane stated. “I definitely like to do my own research and read up about it before I posted the black square.’’

Although Taylor and Ioane – the latter will step out with his Highlanders team-mates against the Chiefs for the first game of Super Rugby Aotearoa in Dunedin on June 13 while the Crusaders have the bye – usually talk to media on rugby matters, the questioning veered towards social issues on Wednesday.

Asked if he had experienced racism, Taylor, 29, replied: “I probably have. Like I say, I am Maori and Pakeha. I know that a lot of people … not even just that, but Pacific Islanders. It is everywhere. And it is not just a certain race or culture.

“It is something that needs to be addressed a bit more to make change.’’

Taylor, along with his Crusaders team-mates, were confronted with racism in the city of Christchurch when the mosque attacks unfolded on March 15 last year.

His message to his fellow Kiwis was to show empathy for others, regardless of their skin colour.

“I think it is just change your thought process of judgement. That would be one way to sort of change the way we look at things, and people and race.

“It is just about unity. We are all human. At the end of the day that’s what it comes down to. We all just have to stand together and look at each other as equals.’’