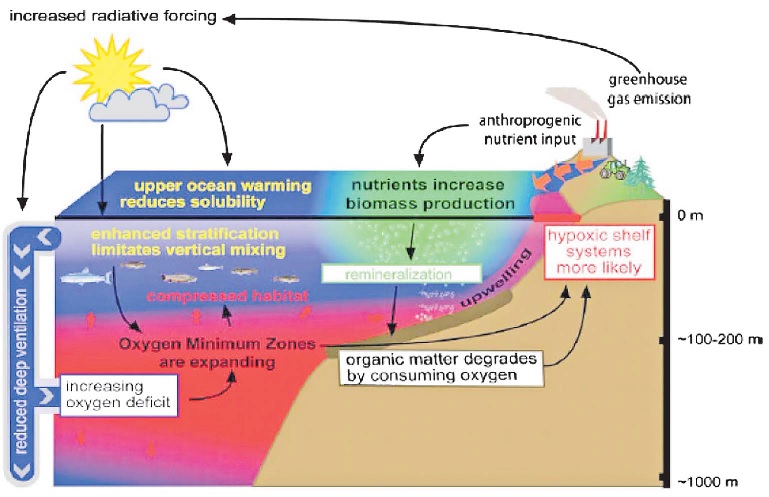 The globe is now more than 1˚ Celsius warmer than it was before industrialisation, and it is on course to be about 3 degrees warmer.

Human actions, predominantly the burning of fossil fuels and deforestation, have contributed to climate change during the past 50 years, compared with natural processes that impact climates, such as solar fluctuation and volcanic eruptions.

Low level of dissolved oxygen is still a major concern for the ecological health of lakes and reservoirs around the world.

The primary reason for falling oxygen levels is rising temperatures because of global warming since warmer water cannot store as much oxygen.

In addition, when summer temperatures rise, the top layer of lakes becomes hotter and less thick than the waters below, plummeting, mixing and reducing oxygen delivery to the depths

. According to scientists, oxygen levels in deep seas have dropped by 19 per cent and at the surface by 5 per cent.

At the surface of some lakes, oxygen levels have risen.

However, this is most likely because of warmer temperatures, which cause algal blooms, which may create harmful chemicals.

The new researches revealed that the climate catastrophe is suffocating the world’s lakes.

According to the experts, the global warming issue is causing oxygen levels in lakes to plummet, killing species and jeopardising drinking water supplies.

A study reveals that the reduction in oxygen levels in lakes has been three to nine times quicker in the past 40 years.

Lake Ammersee is one of such climate victimised lakes in Germany.

Prof Kevin Rose of the Rensselaer Polytechnic Institute (RPI) in the US stated, “All complex life relies on oxygen, and as oxygen levels decline, you significantly reduce the habitat for many different species”.

The average animal populations were dropping by 84 per cent since 1970.

Overuse of water for farming is one of the reasons, in addition to global warming and pollution.

Fishes, insects, birds, and mammals that thrive in freshwater ecosystems have already been severely harmed.

Albeit most of the lakes under study were in temperate zones, especially in Europe and the US, there were a few records from higher latitudes, closer to the poles, and tropical lakes in Africa.

The study shows that the oxygen levels were dropping irrespective of locations.

In nearly a fifth of the lakes investigated, oxygen levels in surface waters were rising, and virtually all of them were polluted. According to Prof Rose, this is a signal of extensive algal blooms.

“We couldn’t tell certainly without taxonomic data, but nothing else we know of can explain this pattern.”

A good example, according to Rose, is Oneida Lake in New York, where a clean-up resulted in improved water clarity, which permitted increased photosynthesis from oxygen-producing algae.

According to the scientists’ best-case scenario, only 10 per cent of the assessed species would be endangered in the next 80 years if the temperature warmed by 1.5˚C.

Researchers discovered that 60 per cent of investigated fish species would be unable to thrive in their existing habitats by 2100 if global warming reaches a worst-case scenario of 4-5 degrees Celsius (7.2 degrees Fahrenheit) over pre-industrial temperatures.

Researchers looked at how changing water temperatures affect water oxygen levels, putting embryos and pregnant fish in danger, in a study of more than 700 fresh
and saltwater fish species.

Fish that are both commercially and environmentally essential, such as Atlantic Cod, Swordfish, Pacific Salmon, Alaska Pollock, and Pacific Cod used to make frozen fish sticks are still in danger in this scenario.

It is difficult to quantify the effects of a 10 per cent loss in species since a single species may be vital to the total ecosystem.

“Take the North Sea, where we predict the temperature to rise to a point where Atlantic Cod will be unable to spawn by the end of the century.

“Because it’s an essential predator, if this one species is driven out of the system, it has a significant influence on the ecosystem as a whole, as well as all the processes and interactions between species,” Flemming T. Dahlke of Alfred – Wegener Institute, Helmholtz Centre for Polar and Marine Research, University of Bremen, Germany.

Fish utilise more energy and demand more oxygen when the temperature rises. However, the heat reduces the amount of oxygen accessible.

Embryos, which cannot control their oxygen levels adequately, and spawning fi sh, which need more oxygen to make progeny, are especially vulnerable under these conditions.

Mr Dahlke pointed out that this estimate is cautious since it ignores other climate-related issues that might harm marine life, such as ocean acidification, which might magnify the impacts on vulnerable species.

“Some tropical fish are already living in zones where they have reached their maximum tolerance, in locations where the temperature has reached 40 degrees,” added Prof Hans-Otto Poertner, a climatologist of the Alfred-Wegener-Institute in Bremerhaven, Germany.

“Humans are pushing the planet’s temperature range out of a tolerable range, and we’re beginning to lose good habitat. It’s worthwhile to put money towards the 1.5° C target.”

An alternative arrangement is a prerequisite to stop the worsening ramification of climate rising and falling state of hydrospheric oxygen level.

Many of the innovators are introducing technology or business models that create less carbon than current methods, such as leather manufactured from mushrooms rather than cows and electric automobiles instead of fossil fuels.

Scholars are researching new technologies that absorb carbon that is already in the air to identify new approaches to combat climate change from a different perspective.

The potential advantages of these methods are enormous, but the obstacles are tremendous at present.