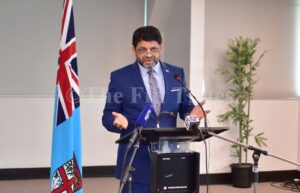 Attorney-General Aiyaz Sayed-Khaiyum has accused the Fiji Bureau of Statistics of “skewering” samples collected for its 2019-2020 Household Income and Expenditure Survey.

During a news conference on Tuesday night he also said the results of the census released in February this year had “some flaws there but we will live with it”.

“As I said, you cannot compare this survey to other household and income expenditure surveys,” he said.

“The reason why? Because the methodology of assessing previously was based on income methodology, now its consumption.

“So they’re different, so even if you look at the various other studies in the world, where World Bank and other groups have helped other Pacific island countries to move from income to consumption, they’ve said you cannot compare this.”

The A-G said Government recognised there were some flaws in the HIES but they “went along” with the 29 per cent poverty rate.

“What we are saying though is that to then transpose that to some sort of ethnic categorisation is completely incorrect — because on what basis have they done so.

“What’s the base that they have used? What reference of the population have they used? So these 6000 samples which they have gone and done – how did they choose people?

“Where did they choose them from exactly? The map obviously is showing it, and it obviously shows a particular skewering of where they got the samples from.”