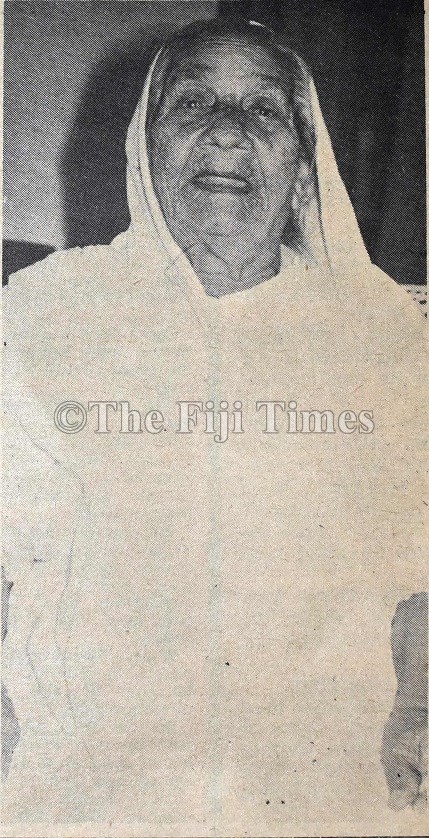 IMAGINE leaving behind your familiar surroundings to make a living in a foreign place with the person you love.

That was what Uriya Ali Jan did more than 100 years ago.

The Fiji Times caught up with the nonagenarian in April 1973 as she talked about how she eloped with her lover when they were just teenagers.

At the time of her interview, the 90-year-old’s descendants numbered over 200.

She and her late husband were teenage runaway lovers from the village of Basti, now Uttar Pradesh, India.

Mrs Ali Jan, matriarch of a clan which numbered about 200, recalled her journey from home with her 16-year-old lover.

“We were in love. Our parents didn’t approve, so we eloped,” she said at the time.

An officer recruited them to join a group of indentured labourers bound for Fiji in the vessel Fazilka II.

Arriving in Fiji in 1901, the couple served their indenture agreement at Nausori and Lovu and then settled on their own farm at Martintar.

“Mrs Ali Jan’s eldest son, Mr Mohammed Raza is 72. She has five sons and three daughters. One daughter died several years ago. She had 79 grandchildren and the number of great-grandchildren cannot be determined,” described The Fiji Times.

The late Mrs Ali Jan later surprised a The Fiji Times photographer by showing a new set of teeth which she said had begun growing.

An interesting fact about the vessel Fazilka II which brought Mrs Ali Jan to Fiji.

The steamship is listed in the book, BI The British India Steam Navigation Company Ltd by W A Laxon and F W Perry.

The vessel was described to be a 4152-ton single-cylinder steamship, built by William Doxford and Sons in 1890.

It made six trips to Fiji, carrying a total of 4972 passengers.

Prior to this, it was first used to carry troops from India to South Africa during the Boer war in 1899.