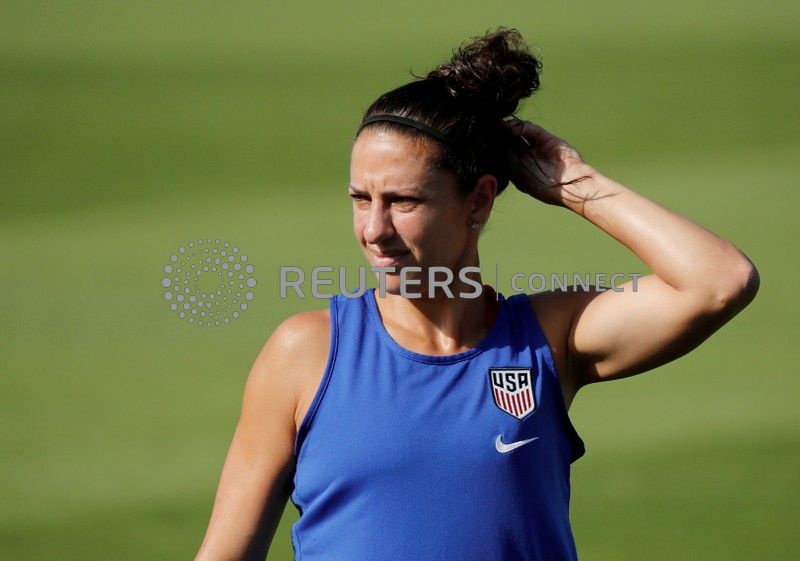 (Reuters) – Carli Lloyd, a twice winner of the women’s World Cup, said on Tuesday that she was seriously considering a future as a pro kicker in the NFL.

“I want to try it. I want to put a helmet on, I want to put pads on, I want to kick with two steps. And then see from there,” Lloyd told former player Julie Foudy on an ESPN podcast, fuelling rumours that she may become the first woman to compete in the NFL. [nL2N25Q02H]

A viral video of the U.S. midfielder kicking a 55-yard field goal at a Philadelphia Eagles practice in August sparked intense interest.

Lloyd told Faudy two teams had wanted her to play in a preseason game, though a conflict prevented it.

The 37-year-old said she had “a couple years” of soccer left in her career, and that she hopes to compete in the 2020 Olympic Games — though she left open the possibly of being “loaned out a bit for a couple preseason NFL games” in the meantime.

Lloyd was eager to focus on the future, telling the “Laughter Permitted” podcast that her 2017 injury and subsequent demotion to the bench for the U.S. Women’s Team at this year’s World Cup had weighed on her.

“I’m not going to lie and sugarcoat it: It was absolutely the worst time of my life,” said Lloyd. “It really was the rock bottom of my entire career.

“I think what helped me the most were my team mates. My team mates, they had my back.”