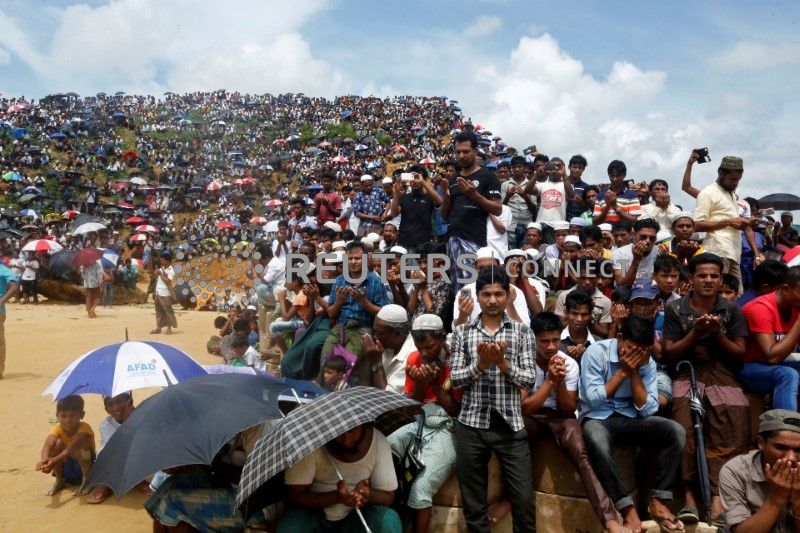 FILE PHOTO: Rohingya refugees take part in a prayer as they gather to mark the second anniversary of the exodus at the Kutupalong camp in Cox’s Bazar, Bangladesh, August 25, 2019. REUTERS/Rafiqur Rahman/File Photo

THE HAGUE/COX’S BAZAAR, Bangladesh (Reuters) – The International Court of Justice on Thursday ordered Myanmar to take urgent measures to protect its Rohingya population from genocide, a ruling cheered by refugees as their first major legal victory since being forced from their homes.

A lawsuit launched by Gambia in November at the United Nations’ highest body for disputes between states accuses Myanmar of genocide against Rohingya in violation of a 1948 convention.

The court’s final decision could take years, and Thursday’s ruling dealt only with Gambia’s request for preliminary measures. But in a unanimous ruling by the 17-judge panel, the court said the Rohingya face an ongoing threat and Myanmar must act to protect them.

Myanmar must “take all measures within its power to prevent all acts” prohibited under the 1948 Genocide Convention, and report back within four months, presiding Judge Abdulqawi Yusuf said, reading out a summary of the judgment.

Myanmar must use its influence over its military and other armed groups to prevent violence against the Rohingya “intended to bring about its physical destruction in whole or in part”.

Rohingya activists, who had come from all over the world to the Hague, reacted with joy to the unanimous ruling which also explicitly recognised their ethnic minority as a protected group under the Genocide Convention.

“That is something we have been fighting for a long time: to be recognised as humans the same as everyone else,” Yasmin Ullah, a Canada-based Rohingya activist said. Majority Buddhist Myanmar generally refuses to describe the Muslim Rohingya as an ethnic group and refers to them as Bangladeshi migrants.

Myanmar’s ministry of foreign affairs said in a statement late on Thursday it “takes note” of the decision.

“The unsubstantiated condemnation of Myanmar by some human rights actors has presented a distorted picture of the situation in Rakhine and affected Myanmar’s bilateral relations with several countries”, it added.

More than 730,000 Rohingya fled Myanmar after a military-led crackdown in 2017, and were forced into squalid camps across the border in Bangladesh. U.N. investigators concluded that the military campaign had been executed with “genocidal intent”.

In camps in Bangladesh where they have fled, Rohingya refugees hovered over mobile phones to watch the judgment.

“For the first time, we have got some justice,” said Mohammed Nur, 34. “This is a big achievement for the entire Rohingya community.”

Rohingya still living inside Myanmar contacted by phone said they hoped the ruling would force the country to improve their situation. “We need protection,” said Tin Aung, a Rohingya leader living in Myebon township in central Rakhine state, where Muslims have been confined to camps since violence in 2012.

A Myanmar government spokesman and two military spokesmen did not answer calls from Reuters seeking comment.

U.N. Secretary-General Antonio Guterres welcomed the court order and “recalls that, pursuant to the Charter and to the Statute of the Court, decisions of the Court are binding and trusts that Myanmar will duly comply,” U.N. spokesman Stephane Dujarric said in a statement.

Mainly Muslim Gambia brought the case despite being located halfway around the world, on the argument that all nations have a universal legal duty to prevent genocide. Tambadou, a former prosecutor at a U.N. tribunal over the Rwanda genocide, took up the issue on behalf of the 57-member OIC group of Muslim states.

The case was argued last month by some of the world’s top human rights lawyers, with Myanmar’s civilian leader Aung San Suu Kyi personally attending hearings at The Hague to ask judges to dismiss it.

Moments before the court began reading its ruling, the Financial Times published an article by Suu Kyi, in which she said war crimes may have been committed against Rohingya Muslims but refugees had exaggerated abuses.

Although ICJ rulings are final and binding, countries have occasionally flouted them, and the court has no formal mechanism to enforce them.

“The ICJ order to Myanmar to take concrete steps to prevent the genocide of the Rohingya is a landmark step to stop further atrocities against one of the world’s most persecuted people,” said Param-Preet Singh, associate international justice director at Human Rights Watch. “Concerned governments and UN bodies should now weigh in to ensure that the order is enforced. …”

Yusuf, the presiding judge, said the court was not satisfied with Myanmar’s own efforts “to facilitate the return of Rohingya refugees present in Bangladesh, to promote ethnic reconciliation, peace and stability in Rakhine State, and to make its military accountable for violations of international humanitarian and human rights law”.

Myanmar will now have to regularly report on its efforts to protect the Rohingya from acts of genocide every six months until a final ruling in the case.