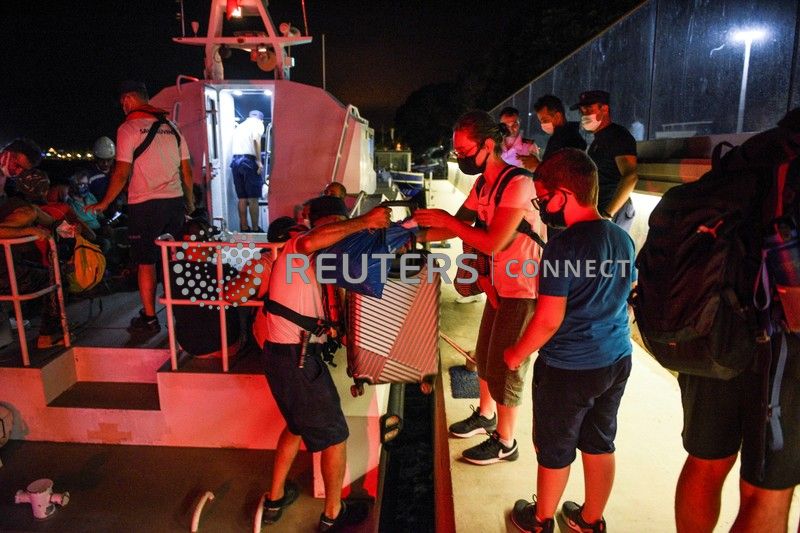 Residents board a coast guard boat to evacuate the area after a fire spread into a coal-fired power plant in Oren, east of Bodrum, Turkey, August 5, 2021. REUTERS/Stringer

MILAS, Turkey (Reuters) -Workers at a coal-fired power station in Turkey’s southwest fled the approaching flames of a wildfire in panic before firefighters brought the blaze under control on Thursday.

Wildfires have devastated tens of thousands of hectares across Turkey’s Mediterranean and Aegean provinces this summer. Eight people have died and thousands of Turks and tourists have fled, sometimes by boat.

The province of Mugla where the Kemerkoy power plant is located is one of the worst hit regions. The municipality said 55,000 hectares have been burnt – more than twice the area burnt across the whole of Turkey last year – and 36,000 people have had been evacuated.

Twelve fires were still burning in the region on Thursday, but the fires which breached the plant’s perimeter on Wednesday evening had been extinguished without damaging the facility’s main units, authorities said.

Sadik Akin, a 28-year-old excavator driver spent the night in the open after he saw flames approaching the coal-fired facility, where he works and lives, and fled with others.

“When we were going back to camp, we saw the fire was nearing the power plant. So we grabbed our bags in a panic and returned,” Akin said.

Cooling efforts continued in the vicinity of Kemerkoy power plant, as a helicopter and plane doused the area with water, and Turkey’s energy minister the plant would resume operation as soon as possible. In the morning, plumes of smoke still rose above the burnt trees around the facility.

President Tayyip Erdogan, facing criticism for his government’s response to the wildfires, says they are the worst that Turkey has suffered.

Hundreds of people have sought medical treatment from the 180 fires that have broken out since July 28, most of whom have been discharged from hospital.

The blazes are the most intense in Turkey on record, a European Union atmosphere monitor said this week, with the heatwave meaning more fires and smoke pollution were likely around the Mediterranean region.

In Greece, authorities ordered evacuations on an island near Athens and battled a blaze near the site of the ancient Olympic Games in the western Peloponnese as wildfires raged for a third day.