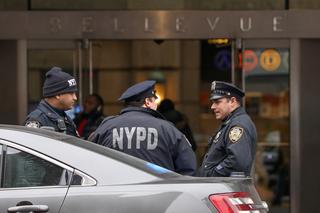 NEW YORK (Reuters) – Former Hollywood producer Harvey Weinstein was in good spirits on Tuesday, as he accepted visitors while under police guard at a Manhattan hospital, his lawyer said, despite having been convicted a day earlier of sexual assault and rape.

Weinstein had been expected to move to New York City’s notorious Rikers Island jail complex following the verdict, but was admitted late Monday night to Bellevue Hospital a few miles away.

One of his lawyers, Arthur Aidala, told reporters after meeting with Weinstein that his 67-year-old client “looked like he was in good shape” but was “not a picture of health by any stretch of the imagination,” and doctors would decide when to release him.

“He was upbeat,” though “obviously he prefers being in his own house,” Aidala said.

Media reports said Weinstein had experienced chest pain or heart palpitations before being admitted to Bellevue, a public hospital.

Aidala said Weinstein was “somewhat flabbergasted by the verdict” and “cautiously optimistic” about his eventual appeal. “I almost feel emboldened by Mr. Weinstein’s spirits and his desire to continue to fight these charges,” Aidala added.

Those counts required jurors to consider accusations by the actress Annabella Sciorra, who testified that Weinstein raped her in the early 1990s.

The actress Ellen Barkin, a friend of Sciorra, tweeted on Tuesday: “Convicted rapist harvey weinstein is still not in jail. He is in a private suite in Bellevue hospital. This is not what the jury had in mind.”