We will vaccinate you – PM 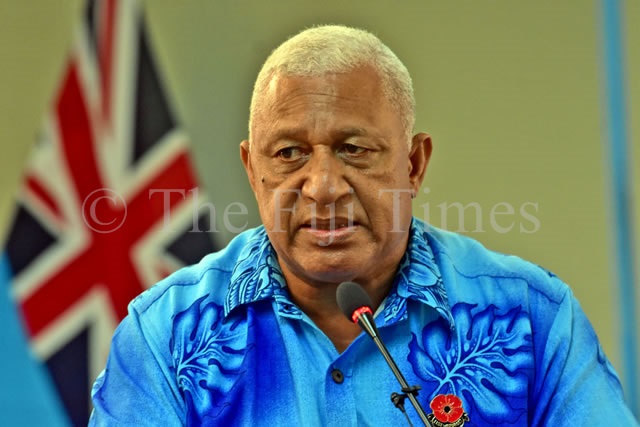 We will vaccinate you. This was the clear warning sent out to foreign travellers by Prime Minister Voreqe Bainimarama after the discovery of an unvaccinated foreign national who managed to enter Fiji’s borders through an Air New Zealand flight.

While speaking to frontline workers in Ba on Wednesday, he explained that unvaccinated travellers would be quarantined and subjected to two doses of the vaccine before being allowed to leave the facility.

“Yesterday (Tuesday), I also gave a directive after I found out that some (unvaccinated) people were coming through Air New Zealand flights,” he said.

“Fiji Airways flights, we check people before they come onboard. “On the Air New Zealand flight – there was this particular person that came in unvaccinated and we discovered it when he was sick.

“He was a Japan national. He came in without being vaccinated.”

Mr Bainimarama said his directive now was if anyone who came in through our airport not vaccinated, we would vaccinate them.

“So no one will escape vaccination coming to Fiji.”

He explained frontline workers had been working hard to ensure Fijians were vaccinated so it was only right for travellers entering Fiji’s international borders to also be vaccinated. “You have gone to a lot of trouble getting people vaccinated. “We can’t afford people coming to Fiji without being vaccinated.

“It is most unfair.”

Meanwhile, Ministry of Health and Medical Services permanent secretary Dr James Fong said the foreign passenger was able to travel to Fiji while Government was about to implement the full vaccination policy.

“He was already on his way when we were making that transition for all travellers to Fiji to be fully vaccinated,” he said. “So we couldn’t tell him to turn back.

“I can confirm that he is in a secured facility and that we have given him his first dose and he is awaiting his second jab.”