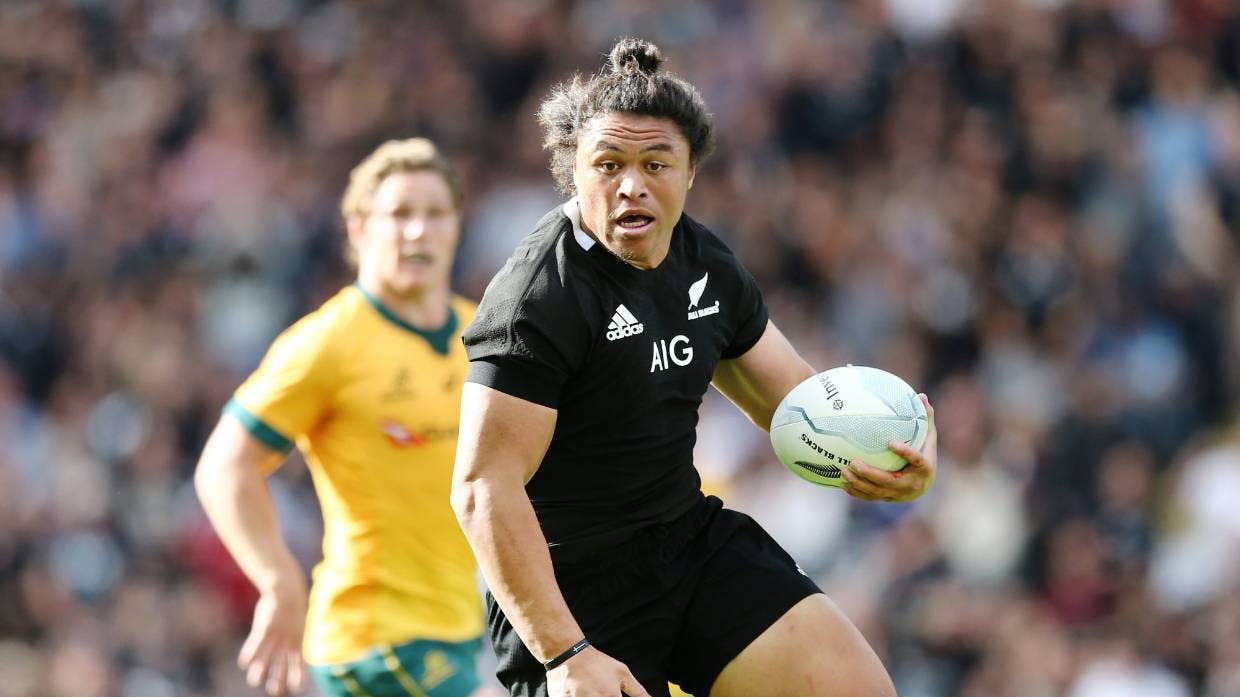 Caleb Clarke on attack against the Wallabies in 2020. Picture: STUFF SPORTS.

While New Zealand’s Olympians have been making history in Tokyo, the Wallabies are seeking to make a little of their own when they take on the All Blacks at Eden Park on Saturday night.

Australia haven’t triumphed at the ground in 35 years and the Auckland fortress will be home to the first two Bledisloe Cup games.

That means the Wallabies will have to win at least one if they’re to reclaim the trophy they haven’t held since 2002.

The All Blacks again proved too strong for Australia at Eden Park last year as they have each time they’ve met at the stadium since 1986.

But rather than be daunted by the prospect, the Wallabies back Reece Hodge says they’re embracing their chance at history.

“There’s no shying away from the fact that it’s been a long time since we’ve had success there and we want to be the team, the 2021 squad that changes it and breaks that hoodoo.”

Hodge believes breaking that hoodoo would have long lasting impacts on the strength of Wallabies rugby.

“I’ve spoken in the past about how lucky I and Al (Wallabies prop Allan Alaalatoa) was being born in ’94 having grown up watching the golden era of Australian rugby.

“Ultimately that’s what inspired me to want to pull on the gold jersey growing up.

“It’s not lost on us how unique of an opportunity it is for us to really inspire that next generation coming through now.

“Those kids watching back in Australia on Saturday night who want to see Australia win, hopefully, we can be that team who can inspire that next generation of athletes coming through to want to be Wallabies and successful Wallabies.”

Many of the current Wallabies could be considered the next generation and veteran midfielder Matt Toomua believes that injection of youth could help them shake off the shackles of Eden Park.

“One positive to this group is that it is a fairly new group, so maybe those scars don’t run so deep.

“At the same time, I don’t think anyone’s going there [feeling] naive or anything, this is a place the All Blacks love to play, and they play very, very well here. But the ignorance of youth is quite a benefit to us, in a way.

“We’re working on our own peace and belief, and ultimately that’s what you’ve got to do. You can’t read too much into the storyline or the narrative.”

The All Blacks coach Ian Foster has made three changes to the starting XV from the one that beat Fiji last month, with lock Brodie Retallick, loose forward Dalton Papalii and winger Rieko Ioane coming in, while Sevu Reece switches from the left to the right wing and Ardie Savea moves from number eight to openside.

Aaron Smith will start at halfback in his 100th test.

“He’s helped shape this team for the last 10 years with the way he’s played. The combination he’s had with our other nines (halfbacks) we’ve had in that time period has been strong.

“He’s a guy that’s got total devotion to his core skills, his pass, his kick and he’s has become a real leader in this group.

“I know how much it means to him, it will be a special occasion for him, his family and us. I know the one thing on his mind is playing well and that’s probably why he’s played 100 tests, he keeps it pretty simple close to kick off.”

Smith isn’t the only one providing motivation for the All Blacks, with Foster also inspired by New Zealand’s feats at the Tokyo Olympics.

“Oh it’s hard not to. I spoke earlier in the week about both our sevens teams and how proud they did us. But, there’s so many others aren’t there? I watched Dylan Schmidt and I thought that was outstanding. Watching the trampoline, talk about intense, that final jump of his was outstanding.”

Those sentiments echoed by All Blacks hooker Codie Taylor, who’s been glued to the golden run in the canoe sprints.

“Watching Lisa Carrington do what she’s doing in the K1 and stuff.

“She’s just a step above everyone else and she’s almost changed the game in her sport.”

And it’s not just the medal winners who are galvanising the All Blacks, with first five Richie Mo’unga even considering a change of sport to get himself to the next Olympics.

“The last week, that’s all we talked about was the Olympics. Just how inspiring it was.

“I’m just a huge follower of the weightlifting, David Liti was awesome, getting an 11kg personal best.

“Seeing the athletes come back to the village and the guys performing the haka for them, we had to sit down and think, ‘How are we going to get to the next one (Olympics)’, maybe the 81kg division in weightlifting, drop two or three kegs [kilograms] to get there.

“That’s probably my only chance.”

The Wallabies chances of ending a 35-year losing streak at Eden Park haven’t been helped by the suspension of a trio of players from the test, including star back Marika Koroibete, for breaching team drinking protocols.

But what if they were to win? For prop James Slipper, who’s been trying to beat the All Blacks at Eden Park for a decade, victory would taste just as sweet as winning Olympic gold.

“I couldn’t think of anything better than winning at Eden Park.”