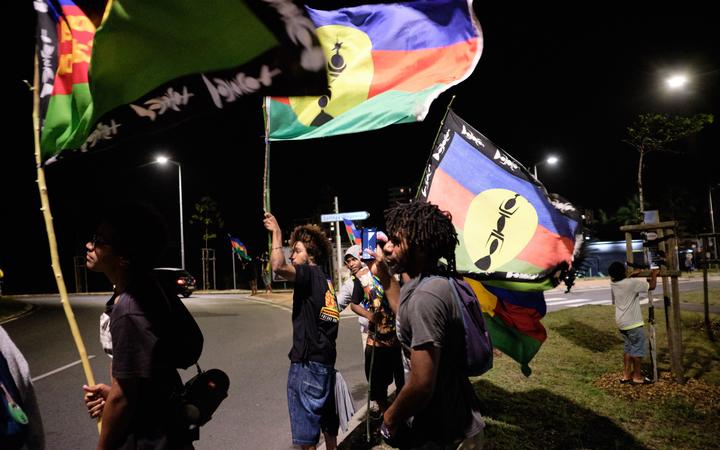 Kanak independence supporters wave flags of the Socialist Kanak National Liberation Front (FLNKS) after the referendum on independence on the French South Pacific territory of New Caledonia in Noumea on October 4, 2020. (Photo by Theo Rouby / AFP) Photo: AFP or licensors

The people of New Caledonia have voted in a referendum on whether they should become independent from France.

It was the second of a possible three votes on this issue under the terms of the Noumea Accord.

On both sides of the debate, parties had been working hard to mobilise voters.

These efforts were successful.

Sunday saw a record turnout of 85.64 per cent, a four per cent increase from the first referendum.

The result was a win for the ‘No’ vote.

However, the margin has narrowed.

The final results were 53.26 per cent voted against independence with 46.74 per cent voting in favour.

This represents a three per cent increase in the share of the vote for the ‘Oui’ campaign.

A third and final referendum can be held if a resolution is passed by one-third of the Congress in New Caledonia.

If it does take place it will most likely be held in 2022.

This comes as his administration nears the end of the ‘grace’ period in which he is protected from challenge by way of a motion of no confidence.

The shake-up has been long anticipated and Prime Minister Marape said that it was necessary in the interests of government stability.

Davis Steven has been replaced as Deputy Prime Minister by Sam Basil.

Mr Basil is also Minister for Planning and is the leader of the United Labour Party.

Mr Steven will continue in his role as Attorney-General.

The people of Bougainville will be interested to note that the Prime Minister has taken on the portfolio of Bougainville Affairs, replacing Sir Puka Temu who has moved to Health.

A new Ministry of Energy has been created and will be led by Mr Willie Onguglo.

Cook Islands has a new PM

There has been a change of leadership in Cook Islands. Long-time Prime Minister Henry Puna has been replaced by Mark Brown who had been serving as Deputy Prime Minister.

Mr Puna announced that he would be leaving national politics some time ago.

He is one of the five people who have nominated as potentials as the next Secretary-General of the Pacific Islands Forum Secretariat.

However, Mr Puna has claimed that his stepping down now was part of a longstanding succession plan.

He has said that he wanted to give his successor sufficient time to demonstrate leadership to the people of Cook Islands ahead of the next elections in 2022.

Reflecting on his time as PM, Mr Puna said he was disappointed he had not been able to progress discussions with New Zealand about Cook Islands joining the United Nations as much as he would have liked.

The leaders of five Micronesian countries have taken a firm stance as to who should be the next secretary general of the Pacific Islands Forum.

The leaders of Federated States of Micronesia, Kiribati, Nauru, the Republic of the Marshall Islands and Palau convened a hybrid meeting last week.

Front of mind for them is the enforcement of a “Gentlemen’s Agreement” that envisages the position of SG rotating among the sub-regions: Melanesia, Micronesia, and Polynesia.

The Micronesian leaders are adamant that their agreed candidate — Ambassador Gerald Zackios — should be endorsed by the regional leadership at an upcoming virtual meeting.

With the charge being led by outgoing President of Palau, Tommy Remengesau Jr, the Micronesian leaders have gone so far as to threaten to cease participation on Forum meetings if their wishes are not met.