US stands with the Pacific: The fight against climate change 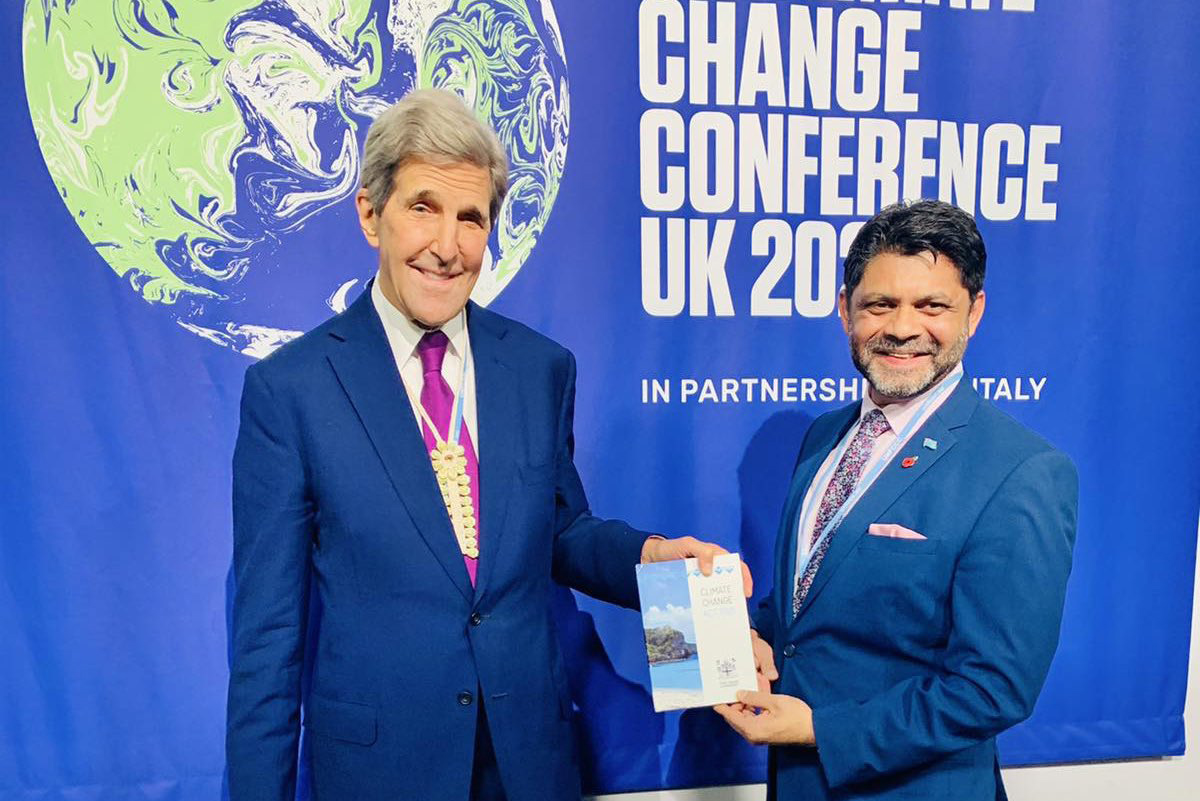 As a Pacific nation ourselves, the US has deep and long-standing ties to the Pacific Islands, who are not only our neighbors but also our friends.

Our countries share an enduring commitment to freedom, democracy, rule of law, human rights, and regional peace and stability.

Today, we unite with the Pacific Islands to address an arguably even greater challenge: global climate change, the serious impacts of which are already being felt across this region.

As the nations of the Pacific already know too well, there is no greater long-term challenge confronting the world.

The Biden- Harris Administration understands the critical role the US must play in the global climate effort, and we have wasted no time re-engaging the international community, including the Pacific Islands, on this shared challenge.

On day one of the 26th Conference of the Parties (COP26) to the UN Framework Convention on Climate Change (UNFCCC), President Biden made clear that the outcome in Glasgow must raise global ambition during this decisive decade of climate action to preserve our shared future.

The President reiterated that tackling the climate crisis requires the whole of society – communities, businesses, states, and local and national governments around the world – to come together to deliver economic prosperity, peace, and security.

Many countries, including the US, put forward bold, ambitious commitments in line with the Paris goal of pursuing efforts to limit warming to 1.5 degrees Celsius – a key priority for Pacific nations, for whom climate change remains an existential issue.

The US nationally determined contribution under the Paris Agreement is to achieve an economy-wide target of reducing greenhouse gas emissions from 2005 levels by 50 to 52 per cent in 2030.

The US also has set goals to create a carbon pollution-free power sector by 2035 and reach net-zero emissions economy-wide by no later than 2050.

At COP26 conclusion, about 200 countries adopted the Glasgow Climate Pact, which reaffirms efforts to limit the global temperature increase to 1.5 degrees Celsius and calls for accelerating efforts towards the phasedown of unabated coal power and phase-out of inefficient fossil fuel subsidies.

The Pact also sets out a path to increase the commitments and actions of countries starting next year. Decisions taken in Glasgow also outline the final set of rules for implementation of the Paris Agreement, including to provide transparency for Parties actions under the Agreement. While this is progress, we recognise this is not
enough.

Consequently, the US will continue to push for more urgent action at home and abroad in this decisive decade for climate action.

Another key initiative launched at COP26 is the Global Methane Pledge, which aims to reduce global methane emissions by at least 30 per cent from 2020 levels by 2030, which in turn could prevent at least 0.2 degrees Celsius of warming by 2050.

According to experts, reducing methane is the single fastest strategy to reduce warming.

We were very glad to see many Pacific nations join the US, the European Union, and countries around the world in this critical initiative.

A total of over 100 countries, which represent 70 per cent of the global economy and nearly half of methane emissions from human activity, have now joined the pledge, and we continue to encourage more to join.

But our climate ambitions must not stop with reducing greenhouse gas emissions.

We must be just as ambitious when it comes to addressing the impacts of climate change, which are already falling most heavily upon the world’s most vulnerable countries and peoples, including those across the Pacific.

In April 2021, President Biden released the first-ever US International Climate Finance Plan and announced at the UN General Assembly in September that he will work with the US Congress to quadruple US international climate finance.

President Biden announced at COP26 the launch of the President’s Emergency Plan for Adaptation and Resilience (PREPARE), a whole-of-government effort that is the largest US initiative ever to help vulnerable countries cope with climate impacts.

As part of PREPARE, the US announced its first-ever pledge to the Adaptation Fund, which at COP26 received $356 million in new support from contributing governments, as well as a significant contribution to the Least Developed Countries Fund.

Lastly, as the Great Ocean States of the Pacific know well, the ocean and climate are inextricably linked, and ocean-based climate solutions are an essential element of keeping the goal to limit warming to 1.5 degrees Celsius within reach.

At COP26, we were proud to partner with Pacific nations and other ocean-climate champion countries to create a “home” for ocean issues under the UNFCCC.

Going forward, Parties to the UNFCCC will have an annual dialogue to advance ocean climate action.

Also, during COP26, the United States announced plans to join the High-Level Panel for a Sustainable Ocean Economy, an initiative that is harnessing the power of the ocean to reduce greenhouse gas emissions, provide jobs and food security, improve climate resilience, and sustain biological diversity.

We also look forward to co-hosting with Palau the February 2022 Our Ocean conference, which will highlight the oceanclimate nexus.

COP26 is not the end of the story. In the months and years ahead, we will continue to work with our fellow Pacific nations to raise global ambitions to reduce greenhouse gas emissions, while assisting those countries on the frontline in adapting to the impacts of climate change.

Together we will continue to push for action beyond Glasgow and keep the 1.5 degrees Celsius goal alive.

• TONY GREUBEL is a Chargé d’Affaires ad interim at the US Embassy. He previously served as deputy chief of mission in Suva. The opinions expressed are the author’s and do not necessarily represent the views of this newspaper.