U.S. ambassador to China to make first visit to Tibet since 2013 – report 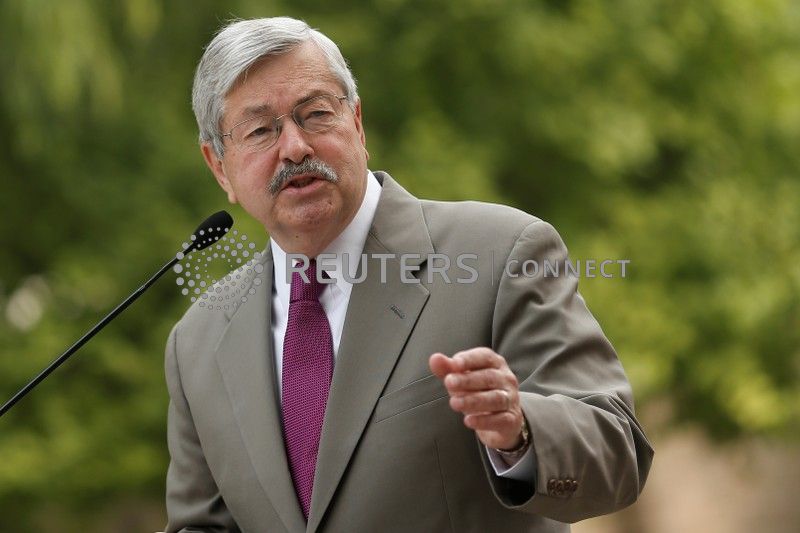 WASHINGTON (Reuters) – U.S. Ambassador to China Terry Branstad was due to begin visiting Tibet on Sunday for official meetings and visits to religious and cultural sites, according to a news report on Sunday.

Branstad was scheduled to visit the Tibet Autonomous Region and Qinghai Province, a historic region of Tibet known to Tibetans as Amdo, from Sunday to Saturday, Radio Free Asia said in a report.

The State Department did not immediately comment on the story.

Radio Free Asia said it would be the first visit to Tibet by a U.S. official since the U.S. Congress approved a law in December that requires the United States to deny visas to Chinese officials in charge of implementing policies that restrict access to Tibet for foreigners. The U.S. government is required to begin denying visas by the end of this year.

In December, China denounced the United States for passing the law, saying it was “resolutely opposed” to the U.S. legislation on what China considers an internal affair, and it risked causing “serious harm” to their relations.

Since then, tensions have been running high between the two countries over trade. China struck a more aggressive tone in its trade war with the United States on Friday, suggesting a resumption of talks between the world’s two largest economies would be meaningless unless Washington changed course.

On Saturday, China’s senior diplomat Wang Yi told U.S. Secretary of State Mike Pompeo that recent U.S. words and actions had harmed the interests of China and its enterprises, and that Washington should show restraint.

While the Trump administration has taken a tough stance towards China on trade and highlighted security rivalry with Beijing, the administration has so far not acted on congressional calls for it to impose sanctions on China’s former Communist Party chief in Tibet, Chen Quanguo, for the treatment of minority Muslims in Xinjiang province, where he is currently party chief.

A State Department report in March said Chen had replicated in Xinjiang, policies similar to those credited with reducing opposition to Chinese rule in Tibet.

Beijing sent troops into remote, mountainous Tibet in 1950 in what it officially terms a peaceful liberation and has ruled there with an iron fist ever since.