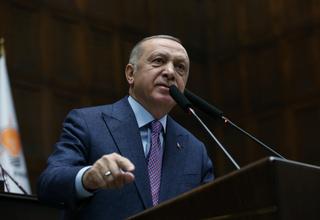 Nearly a million Syrians have been displaced in the last three months by fighting between Turkish-backed rebels and Syrian forces trying to recapture the last major insurgent-held region in Syria after nine years of war.

Ankara has sent thousands of troops and truckloads of equipment into the region, in Syria’s northwest corner bordering Turkey, to support the rebels and Erdogan has vowed to push back Syrian President Bashar al-Assad’s forces.

“We are planning to liberate our observation posts from the surrounding (Syrian government forces) by the end of this month, one way or another,” Erdogan told his party’s lawmakers in a speech.

But Assad’s forces made fresh gains in southern Idlib province where they took a number of villages on Wednesday, according to the Syrian Observatory for Human Rights, a war monitor, and a military news outlet run by Assad’s Lebanese ally Hezbollah.

The pro-government forces’ immediate objective is to reach the town of Kafar Aweed, the capture of which would force rebels to withdraw from a wider tract of territory including their last remaining foothold in Hama province, Observatory Director Rami Abdulrahman said.

The Syrian army said it had seized numerous villages and towns in the last few days in the south of Idlib province, describing the captured territory as an important crossroads between rebel-held territories.

Early on Thursday, Turkey’s Defense Ministry said two of its soldiers were killed and two others wounded in an air strike on Turkish forces in Idlib. Sixteen other Turkish soldiers have been killed in the region this month.

The ministry said the Turkish military opened fire on Syrian government targets in response. It said that according to various sources in the region 114 members of the Syrian forces were “neutralized”.

Erdogan first demanded on Feb. 5 that Assad’s forces pull back behind a line of Turkish observation posts by end-February, or Turkey would drive them back.

Turkey set up 12 observation posts up around a “de-escalation zone” in Idlib under a 2017 agreement with Russia and Iran, but several now find themselves behind Syrian government front lines.

Syrian insurgents backed by the Turkish military seized the town of Nairab in Idlib this week, according to rebel and Turkish sources, the first area to be taken back from advancing Syrian government forces.