To lead well, connect to your people: Duituturaga to Forum Leaders 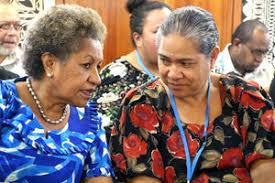 AUCKLAND, 10 JULY 2019 (PMN) – As they prepare to head to Tuvalu, Pacific Islands Forum leaders are being reminded the best way to ensure action once they leave Funafuti is to stay tuned to what activists are saying.

Fiji-based development consultant Emele Duituturaga made the call as she handed the reigns of the Pacific’s umbrella civil society body to incoming PIANGO boss Siale Ilolahia, of Tonga. Duituturaga revived the Pacific Islands Association of NGOs, also known as PIANGO, from a state of collapse almost a decade ago, leading PIANGO to its current role as the civil society go-to for Pacific Forum Leaders.

The Tuvalu forum will be Ilolahia’s first at the helm of PIANGO, who’ve become a key fixture of the Forum leaders side events through breakfast briefings and side events. PIANGO presents a powerful alliance of national civil society members able to present on the world stage from their village networks and island realities.

Moving activism from a concerned community to a national conversation, then past the Forum fringes and into the observer margins of the Leaders annual events has been no small feat for Duituturaga.

She says its critical Forum Leaders remember the people they represent when they make the big decisions affecting Pacific futures and how we speak to the world.

Climate change, sustainable development goals, fisheries, oceans and security frameworks. gender equality and violence, lifestyle diseases and reproductive health. For Duituturaga, the battle on climate change and the 1.5 to stay alive target was realised at the global, highest level through the constant, never ending work of civil society to influence what is happening at the tables when elected leaders meet.

“The (global) climate campaign was powerful because it happened outside the corridors of power,” says Duituturaga. It’s a learning curve in engaging citizens, mobilising youth, and keeping the high-level conversations in the public eye, which Forum leaders must continue.

Siale Ilolahia has been mentored into her new role at the PIANGO helm, but also brings more than two decades of civil society experience at the national and global level with her.

She will be keen to build on the gains her predecessor has made in building the profile and brand of the regional civil society platform, and keep up the lobbying that delivers for Pacific people.

For Duituturaga, as she bows out from the civil society limelight to put time back into some family priorities, there’s a keen awareness that a generation of rising strategists and activists in the Pacific are looking for new leaders to follow.

They, as well as the new PIANGO boss, are likely to hold her parting advice to heart as they take on the next level of development activism without her.

Working in the field of activism for people is about doing “development as if people matter.”

“I think that’s the strongest theme, and rethinking the Pacific we want,” says Duituturaga. The big global development targets are ten years around the corner, but we need to be ahead of that.

Weird’ playing without fans, but good to be playing again – Kvitova

Minnesota trucker who drove through protesters was ‘frustrated,’ governor says