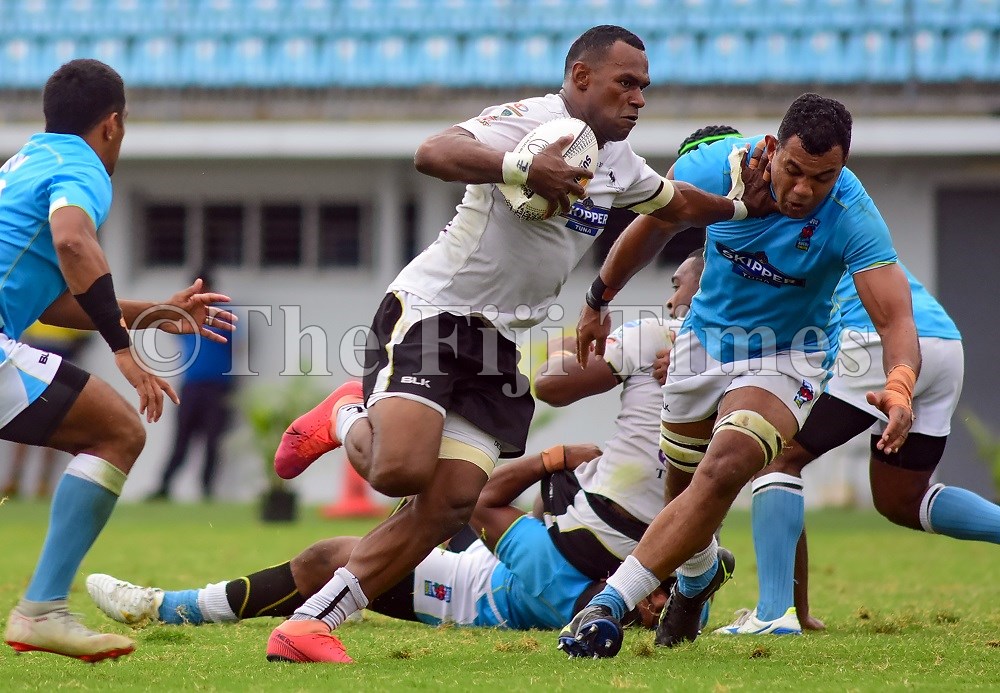 Action between Nadroga and Suva at the ANZ Stadium in Suva at the weekend. Picture: ELIKI NUKUTABU

The one opportunity for the Nadroga rugby team to avenge its loss against Namosi in the second round of the Skipper Cup and Farebrother-Sullivan Trophy challenge is just around the corner.

Expectations, doubts and hopes of the favourite to win the match on Saturday has been a hot topic throughout the week in every household who follow the sport of rugby union.

Nadroga veteran front rower Setefano Somoca has revealed that they are on the right track with five victories and three losses but are still on second place.

From the first round to the eighth round last weekend, Nadroga head coach Esala Nauga has never maintained the same line-up and following the Stallions performances every weekend, they’ve been including new players to be part of the line-up with the senior reps.

Nadroga has named more than 10 players to debut in the Skipper Cup competition and the coaching panel were impressed with some of the players’ talent in the field such as Sevuloni Mocenacagi, Kavekini Tabu, Isoa Tabu and Beniamino Kalounidau to name a few.

Many Nadroga fans have doubts on the team’s journey to the end of the season but others believe that Nadroga is like the Crusaders team in Super Rugby.

They start on a low note, losing some of their matches in the first round but when they build the momentum and gets into the rhythm of the competition nothing will stand in their way.

Speaking with confidence to this newspaper, Somoca said it was about time the Farebrother returned home.

“When the dust settles at Ratu Cakobau Park on Saturday, the Farebrother Sullivan trophy will return to Nakuruvarua,” he said.

Fans play a major role in a team’s performance on the field and Nadroga’s supporters hasn’t been where it’s expected to be.

There are many factors that contributed to the outcome of the low turnout for the past few years, like live television broadcast where many fans prefer to sit at the comfort of their homes and watch the games.

Others depend on their financial budget but one major cause was the consistent win and home games Nadroga has been playing in the past, defending the Farebrother consecutively in 1997, 2010, 2011, etc and their historical nine-year reign.

That has impacted the fans turnout to watch the Nadroga team play because they already know the outcome of the match.

However that stigma has changed as Nadroga lost the trophy to Namosi in the second round and now they are going back to claim the title from the Nabukebuke side.

Not only Namosi changed the mindset of the Nadroga supporters, Suva has beaten Nadroga three times at the ANZ Stadium from 2018-2020 and Naitasiri at Lawaqa Park in the first round. Somoca spoke on behalf of the players as he urge the Nadroga fans to support the boys on Saturday.

“I ask all our fans to come and cheer for the boys because it will boost their morale and lift their performances against Namosi,” said Somoca.

Meanwhile Namosi has defended the Farebrother Sullivan trophy from Naitasiri and Lautoka since they claimed the silverware from Nadroga in the second round.

Now it’s Nadroga’s turn to challenge Namosi and try to reclaim the title before three challenges lined up before them to the end of the season.