The Voice – Voli makes it big 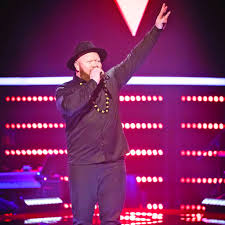 Voli Koroi sings his heart out during his The Voice audition. Picture: SUPPLIED

WHEN Voli was asked by The Voice judges where he was from he proudly said “My name is Voli and I am from the beautiful Fiji islands. I’m an albino Fijian living in beautiful Bondi beach, I’m so honoured to be here”.

Growing up Poasa Voli Koroibuleka (Voli as he is commonly known) had always wanted to be a singer.

“He will either be tapping on pots, and pans and drums,” said his parents.

Educated at the Campsie Public School, Voli furthered his education at Kingsgrove North High Sydney, then on to Newtown Performing Arts Academy and then acquiring a Certificate in Business and Certificate in Applied Finance.

From the young boy who once sang at Sunday school and worked as a financial adviser for DRU HILL in AMP Sydney, the Kadavu lad from Nacomoto, Naceva, Kadavu with maternal links to Namalata, Tavuki also on Kadavu has worked with artists such as Australian-born and New Zealand-based Stan Walker, Autsralian R&B, pop singer and songwrite Jessica Mauboy and American singers and songwriters Trey Songz and Ryan Leslie in addition to our very own George Fiji Veikoso.

“He was very noisy but always imitating performers and songs.

“I guess as every parent would feel, witnessing a child fulfilling his or her dream is an amazing feeling, a feeling of satisfaction that you as a parent have been walking with your child until the fulfilment.

“His life is a fulfilment that despite what people may say, your destiny will be determined by who you are and who you walk with,” his parents Ana and Kini Koroibuleka told this newspaper.

Growing up Voli had his own personal battles and it took his faith and support from his family to battle through these challenges.

“Among five siblings that loved each other dearly it was always fun.


“Being an albino comes with being visually impaired. In school it was so hard to learn but through the passion of wanting to succeed in life, I found myself using technology to learn and to equip myself in order to live the dream I live now.

“Many times, adversity may come knocking at my door but through the faith in Jesus I’ve always become an overcomer,” Voli told this newspaper.

“People may say and see things differently but never lose focus. Remain humble, respect all, never give up in doing good and never forget only God is the source of everything,” his parents added.

“We give glory to God in blessing our son to be where he is right now. It’s another bold confirmation that Fiji may be a small nation, but “we punch like heavyweights” in everything we Fijians do, we do it to the best of our abilities because we are a blessed nation.”

His parents taught him to “always remain humble and never take anything too serious” and today he “is living my dream”.

In October last year, Voli was asked to audition for The Voice, and he choice “I’m not the only one” by Sam Smith as his audition song.

His rendition of the song was very impressive that the judges did not hesitate to turn their chairs.

“I felt really excited knowing that my life was about to change to another level and I kinda agreed with them 100 per cent. God is good.”

Going into the next rounds Voli becomes only the second Fijian to progress to the second round and he has promised to give his best shot.

“It will be the battle of the century. “Yes to that, but I am the first Albino Fijian to get on this stage representing our beloved Fiji.” His greatest inspiration are his parents that, “despite all odds, love for life, for others and God conquers all”.

As for budding musicians Voli said; “when you find yourself, you will find your break”.