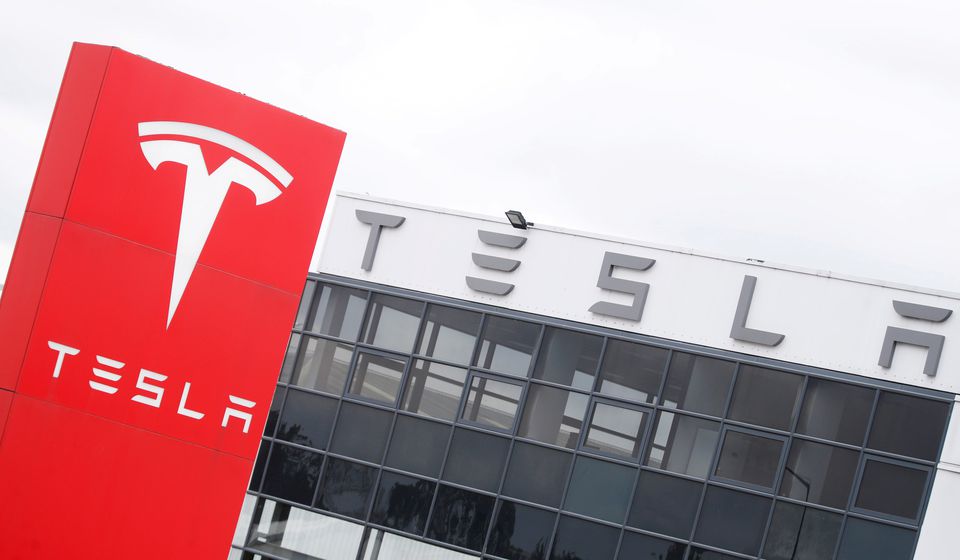 The logo of car manufacturer Tesla is seen at a dealership in London, Britain, May 14, 2021. REUTERS/Matthew Childs/File Photo

Tesla Inc (TSLA.O)surpassed $1 trillion in market capitalization on Monday after landing its biggest-ever order from rental car company Hertz, a deal that reinforced the electric car leader’s ambitions to top the entire auto industry in sales over the next decade.

Most automakers do not boast about sales to rental car companies, often made at discounts to unload slow-selling models. But for Tesla and its investors, Hertz’s decision to order 100,000 Tesla vehicles by the end of 2022 showed electric vehicles are no longer a niche product, but will dominate the mass car market in the near future.

Tesla Chief Executive Elon Musk has set an annual sales growth target of 50%, on average, eventually reaching 20 million vehicles a year. That would be more than twice the volume of current sales leaders Volkswagen AG and Toyota Motor Corp (7203.T).

Consumer demand for electric vehicles is turning a corner in some major markets. The Tesla Model 3 was the best-selling vehicle of any kind in Europe last month, consulting firm JATO Dynamics reported Monday.

Tesla also appeared on Monday to be making progress resolving regulatory problems that threatened its business in China. The company said it had opened a new data and research center in Shanghai to comply with government requirements that data collected from vehicles in China stay in the country.

However, Tesla faced new U.S. regulatory pressure on Monday. The National Transportation Safety Board’s new chief sent Musk a letter questioning why Tesla was rolling out its “Full Self Driving” software even though the company has not officially responded to the NTSB’s questions about the automated driving system’s safety.

Tesla shares surged over 9.5% to top $995.75, making the company worth $1 trillion, according to Reuters calculations based on its latest filing.

Still, Tesla is the most highly valued of any of the world’s auto manufacturers, and is knocking on the door of an elite club that includes Apple Inc (AAPL.O), Amazon.com Inc (AMZN.O), Microsoft Corp (MSFT.O) and Alphabet Inc (GOOGL.O)

“It (the Hertz order) puts an exclamation point under guidance for 50%+ growth in deliveries,” Roth Capital analyst Craig Irwin said. “Another solid piece of evidence EVs are going mainstream.”

Tesla now faces the daunting day-to-day challenge of becoming a high-volume automaker growing at a rate not seen since the early 1900s when demand exploded for Henry Ford’s Model T.

Tesla is coping with an order backlog for its vehicles and extended supply chain disruptions. Tesla Chief Financial Officer Zachary Kirkhorn cautioned investors during a call last week that Tesla’s near-term production goals will hinge on resolving those disruptions and ramping up two new, huge assembly and battery plants in Austin and Berlin. read more

“There is quite an execution journey ahead of us,” Kirkhorn said.

Investors and analysts, for now, are looking past the near-term challenges. Morgan Stanley boosted its Tesla price target by 33% to $1,200 as the brokerage expects the electric carmaker to surpass 8 million deliveries in 2030.

The Hertz deal also underscored the power of the Tesla brand, as the rental car company emerges from bankruptcy and aims to revive its once-dominant brand. Hertz’s rescue is led by a group of investors including Knighthead Capital Management, Certares Opportunities and Apollo Capital Management.

“We absolutely believe that this is going to be competitive advantage for us,” interim Hertz CEO Mark Fields said of the Tesla order, due to be delivered by the end of 2022.

“We want to be a leader in mobility. … Getting customers experience with electrified vehicles is an absolute priority for us.”

Tesla’s cheapest Model 3 sedan starts at about $44,000, making this order worth about $4.4 billion, if the entire order were for its mass-market sedan.

Fields declined to say how much Hertz was paying for the order. Tesla was not immediately available for comment.

With the current order, Hertz said EVs will make up more than 20% of its global fleet. Fields cited the rising number of EVs for sale and consumer interest in electrified vehicles.

Hertz also said it was installing thousands of chargers throughout its network. Customers who rent a Tesla Model 3 will have access to 3,000 Tesla supercharging stations throughout the United States and Europe.