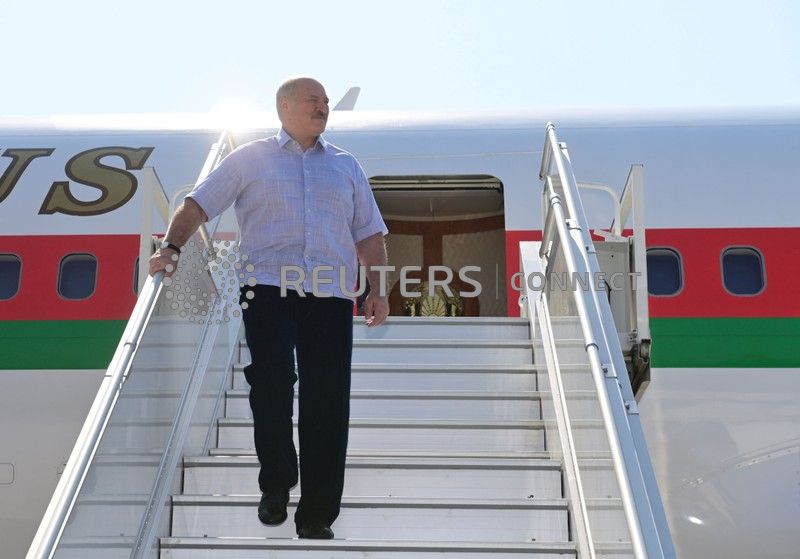 FILE PHOTO: Belarusian President Alexander Lukashenko walks out of a plane upon his arrival at an airport in Sochi, Russia September 14, 2020. Andrei Stasevich/BelTA/Handout via REUTERS

COPENHAGEN (Reuters) – Seventeen members of the Organization for Security and Cooperation in Europe (OSCE) have appointed an independent team of experts to investigate alleged rights violations in Belarus’ August presidential election, Denmark said on Thursday.

“Basically, the mission is about holding the Belarussian authorities accountable for their gross violations of the right of the people of Belarus to have free and fair elections, fundamental freedoms and a well-functioning rule of law,” Foreign Minister Jeppe Kofod said in a statement.

The mission is expected to publish a report within six to eight weeks, his ministry said.

It will investigate reports of persecution of candidates, journalists and activists as well as excessive use of force against peaceful protesters, illegal detention and torture.

President Alexander Lukashenko says he won re-election fairly and is the victim of a Western smear campaign.

Speaking on a visit to Washington, British Foreign Secretary Dominic Raab said he believed the game plan of Lukashenko and his main backer, Russian President Vladimir Putin, was to “try to sit this out.”

“When we’ve got answers … under that independent auspices, I think it would be very hard for Lukashenko just to carry on as normal,” Raab told the Atlantic Council think tank, referring to the mission.

“They’ll try, I suspect, and the crucial thing at that point is the action the international community takes,” Raab said, adding there should be room for dialogue – under OSCE auspices or otherwise – “coupled with really clear costs if the regimes in Moscow and in Belarus just do not move.”

The OSCE mission is unlikely to gain access to Belarus.

Minsk prevented the deployment of OSCE election observers by not inviting them, and has ignored repeated offers by the OSCE chairman, Albanian Prime Minister Edi Rama, to visit.

The OSCE, a rights and security body, is made up of 57 nations, including Russia.

Separately, a group of 29 countries, including the United States, Germany and Britain, issued a joint statement condemning reported internet shutdowns by the Belarus government following the “fraudulent” election.

“Shutdowns and blocking or filtering of services unjustifiably limit the rights of peaceful assembly and freedoms of association and expression, especially when they lack procedural fairness and transparency,” the statement said.