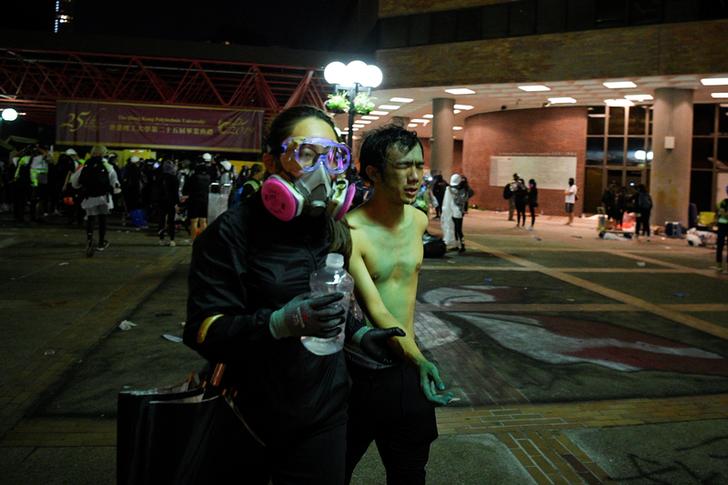 An injured anti-government protester is led away after clashes with police at Hong Kong Polytechnic University in Hong Kong, China November 17, 2019. REUTERS/Laurel Chor

HONG KONG (Reuters) – Hong Kong police fired tear gas at protesters as they tried to escape a besieged university on Monday while hundreds more pro-democracy activists stayed inside armed with petrol bombs and other weapons awaiting an expected operation to oust them.

The bloody standoff between security forces and activists at Polytechnic University entered its second day after a night of mayhem in which a police van was set alight and a police officer was shot with an arrow.

“Remember you have life in your hands. Why do you need to push us to death?” one person shouted at police from a campus rooftop as protesters wearing gas masks and clutching umbrellas looked for ways to escape the university.

Police warned they were ready to use live bullets if “rioters” continued to used lethal weapons, amid a dramatic escalation of the unrest that has plunged the Asian financial hub into chaos for almost six months.

Demonstrators angry at what they see as Chinese meddling in the former British colony have said they are responding to excessive use of force by police.

“The protesters have been reacting to the police,” said Joris, 23, a civil engineer who like others did not give his full name. “We haven’t fought back as much as we could. I would be prepared for jail. We are fighting for Hong Kong.”

Elsewhere in the semi-autonomous territory on Monday riot police arrived in the commercial Nathan Road area where black-clad protesters had roamed the streets before dawn, many carrying petrol bombs.

Police started to clear away debris including umbrellas, bricks and furniture items down one of the city’s busiest tourist and commercial districts, to make way for traffic.