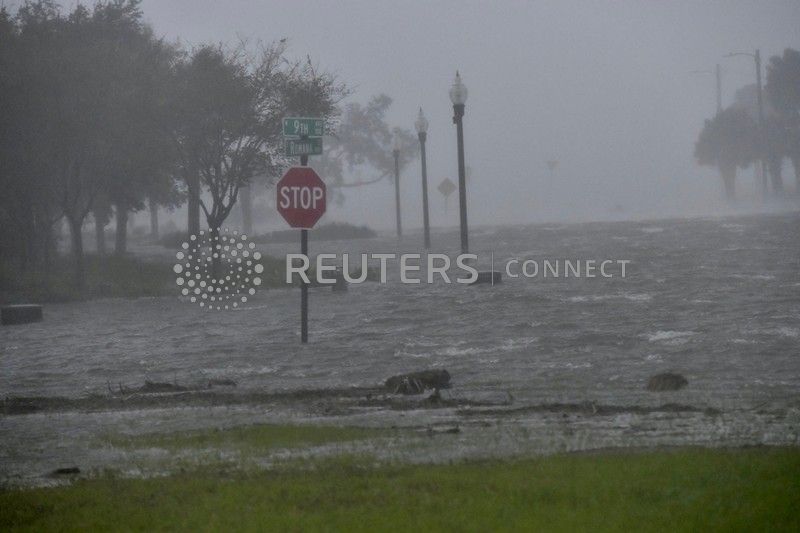 PERDIDO KEY, Florida (Reuters) – The remnants of Hurricane Sally dumped more than a foot of rain on parts of Alabama, Florida and Georgia on Thursday, killed at least one person, washed out bridges and roads and left hundreds of thousands without power and others with ruined homes.

Sally brought torrential rains and flash flooding to Georgia as it slogged to the Carolinas. At 11 a.m. CDT (1600 GMT), it was about 115 miles (185 km) southwest of Athens, Georgia, moving northeast at 23 miles (33 km) per hour, the U.S. National Hurricane Center said in its final advisory on the remnants of the storm.

JJ McNelis, 64, who co-owns a real estate office in Florida’s Perdido Key, tried to salvage equipment and personal items, including pictures of his children from the building after the hurricane ripped away its roof and flung it into the neighboring property.

“We anticipated a hurricane,” he said. “We didn’t expect a direct hit. We thought we’d show up the next day and have a building standing but lo and behold, that’s not the case.”

He said he had already decided against rebuilding: “Somebody else can have this. It’s jinxed now.”

Some areas were inundated with more than 2 feet (60 cm) of rain. Pensacola, Florida, east of the storm’s landfall, experienced up to 5 feet of flooding, and travel across the region was limited by damaged roads and bridges. Some 433,000 homes and businesses in Alabama, Georgia and Florida remained without power.

Lee Hayes, 56, a security officer, held her dog Rico close to her as she recounted how she lost an entire side wall of her home in Perdido Key overnight.

She had been ready to leave at any moment, her kayak ready on her couch inside, both her and her dog wearing life jackets.

Joe Biden, the Democratic nominee for president, offered prayers for residents, and called for a national response to climate change. Scientists say the warming climate has increased the intensity of hurricanes.

Utility crews and residents made repairs and cleared storm debris after Sally washed out roads and bridges and left dozens of boats pushed ashore.

Fuel prices rose again on Thursday as six refineries were offline, and OPEC promised to crack down on members not keeping to production cuts. Gasoline futures rose 2% to near the high for the month.

“This year we’ve just got hurricane after hurricane,” said Matt Lane, 23, a member of a crew from New Hampshire Electric Co-op who arrived on Tuesday from Hurricane Laura recovery efforts in Texas.

Sally was the 18th named storm in the Atlantic this year and the eighth of tropical storm of hurricane strength to hit the United States.

A tropical disturbance was brewing in the southern Gulf of Mexico on Thursday that has a 90% chance of becoming a cyclone in the next 48 hours. Two other named storms were in the Atlantic, making this one of the most active Atlantic hurricane seasons on record.

Energy companies were returning Gulf of Mexico offshore oil crews and assessing damages to coastal facilities. Several said their facilities weathered the storm and were preparing to restart.