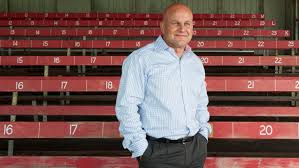 SYDNEY, 22 OCTOBER 2020 (SMH) – Rugby Australia boss Rob Clarke agrees with Gary Ella that the code needs better pathways for Indigenous talent to reach the top as the Wallabies legend nominated who he believed would be the next First Nations player to wear the jersey.

Wallabies back Dane Haylett-Petty also said the team might consider dropping a knee in support of the Black Lives Matter movement before the third Bledisloe Test in Sydney on October 31, when they will wear the new strip.Rugby Australia boss Rob Clarke agrees with Gary Ella that the code needs better pathways for Indigenous talent to reach the top as the Wallabies legend nominated who he believed would be the next First Nations player to wear the jersey.

Wallabies back Dane Haylett-Petty also said the team might consider dropping a knee in support of the Black Lives Matter movement before the third Bledisloe Test in Sydney on October 31, when they will wear the new strip.

Australia’s new Indigenous jersey, designed by Dennis Golding, was formally unveiled on Wednesday at the National Centre of Indigenous Excellence in Redfern.

In years gone, Kurtley Beale was a driving force behind the jersey, which was introduced in 2017. But Beale now plays in France and is not involved with the new Wallabies set-up under Dave Rennie.

Three years ago in the same building, Beale took part in an impromptu corroboree but this time sent a video message from Paris.

The First Nations jersey has been worn three times – against New Zealand in 2017 in Brisbane, against England in 2018 at Twickenham, and against Uruguay at the World Cup last year – but there are no Indigenous representatives in this year’s Wallabies squad.

It begs the question: who will become the 15th Indigenous player to don a Wallabies jersey? Whoever it is will follow in the footsteps of legends Lloyd McDermott, the Ella Brothers and Andrew Walker.

“[Andy] Muirhead from the Brumbies is playing quite well at the moment … he’s one that comes to mind,” Ella said. “I think he was pretty unlucky to miss the squad.

“On the jersey it has the 14 big circles and that represents the 14 players. We want more [Indigenous] Wallabies playing so we can get a new design with a couple more circles on it as well. We want about 20 of those in the next couple of years.”

While rugby league and Australian rules football churn out Indigenous stars with comparative ease, rugby is under-represented. Ella, while acknowledging improvements had been made, wants to see more stars of tomorrow nurtured.

“One of the things we do need is to run more programs, we need to target a few more programs,” Ella said. “It was always very difficult to get into the rugby community but that’s been broken down quite a bit.

“We’ve had a good relationship which is getting stronger each year with Rugby Australia. We’re gradually introducing the game to more Aboriginal communities around Australia. Now they’re seeing rugby offers just as much [as league].”

RA invested heavily in its ‘Dream Big Time’ program last year, when scouts went to all parts of the country to unearth Indigenous talent. Clarke and RA chairman Hamish McLennan conceded more could be done.

“It’s critically important and I think we can do a lot better as Gary said,” Clarke said. “There’s a lot of work we’ve done to try and harness the extreme talent that exists out there for sport among the Indigenous community and rugby needs to do a better job and we’ll do that with additional programs in the coming years.”

McLennan added: “It shows we’ve got to open up more player pathways for Indigenous rugby players. What it also says is we’re very committed to an inclusive culture and very proud of our Aboriginal Indigenous heritage and we’re going to promote it proudly.”

Meanwhile, Haylett-Petty was asked whether the Wallabies would discuss dropping a knee for the Bledisloe match, in a sign of solidarity against racially motivated violence around the world.

“I obviously can’t speak for everyone but I think it would be a great show of support … we’d definitely consider it,” he said.

Haylett-Petty, who is hoping to be available for the Wallabies’ next match, agreed Australian rugby “needs more Kurtley Beales”.

“So many talented athletes, we see them dominating AFL and NRL, and I think it’d be great to see more and more come through and wear the Wallabies jersey,” he said.

The jersey will also be worn against Argentina on December 5 at Bankwest Stadium and Ella is expecting plenty of mates to come out of the woodwork for both Test weeks.

“A lot of my Indigenous mates get really excited about it. All I cop all week is, ‘when are you going to get me a jersey?’” Ella said.

“The jersey is special. Every time it’s put on, a lot of the people I talk to, their eyes light up. We like to think rugby is now being more inclusive than it’s ever been and possibly as much as any other sport that is being played in Australia.”