POINT OF ORIGIN: Beacons of hope 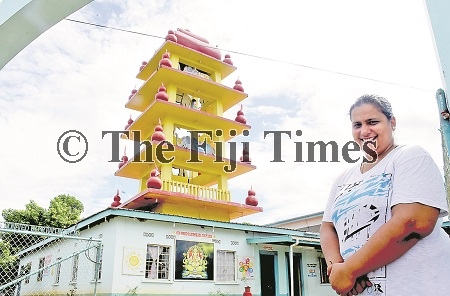 Masimasi Primary School is located next to one of the oldest shrines to the Hindu deity, Ganesha.

The temple and school at Sabeto, Nadi, have acted as beacons of hope for the hundreds of Hindus that live in the shadows of the Sleeping Giants.

The Maha Sabha Shree Maha Ganesh Temple has attracted thousands of devotees since the mid 1940s.

The school has been a breeding ground of many intellectuals, farmers and businessmen and women since its establishment in the early 1960s.

Shyam Bal Kissun, one of the school’s founding members, said an acre of leased land was given by renowned Sabeto holy man, Pundit Ram Swaroop Maharaj, on March 24 1946.

The Maha Sabha Shree Maha Ganesh Temple was constructed and completed that year.

“After the construction of the temple, the temple committee decided to build a kindergarten in 1962 which was also utilised for cultural lessons,” he reminisced.

“There was no kindergarten within the vanua o Sabeto at that time.

“The committee members resorted to fundraising towards the building by organising Ram Lila plays and by doing this, they collected the much-needed finance to erect the building which still stands to date.

“Initially it used to host cultural classes, but it also operated as a kindergarten and eventually became part of the school.”

Mr Kissun said because of the fact a lot of people visited the temple for prayers, especially canefarmers from Masimasi, Wailoko, Sabeto, Waimalika, Naboutini, Keolaiya, Nadele and even Barara in Lautoka, the urge to have a proper school for the children within the locality developed from informal discussions to a formal plan by the temple committee members.

“After the kindergarten was opened, funds acquired from the very popular Ram Lila shows, generous donations from the members of the public and an approved bank loan, the management committee successfully built a double-storey building which was officially opened in 1970.

“A very well-known contractor at the time, Ashok Kumar, took charge of erecting the school building.

“The main reason for building a primary school at Masimasi was because it was realised that after their kindergarten education, the small kids did not have access to a primary school nearby.

“And this was a huge worry for parents because the small kids had to travel quite far to attend the nearest primary school – Sabeto Central Primary School – located about ten kilometres away.

“Because there were so many children, the buses were usually overcrowded and parents feared sending their children, especially the tiny tots, on foot to Sabeto Central Primary.

“The first manager of the school was Ram Dayal, proprietor of Dayals Transport, which was a bus company in Nadi at the time.”

The colonial government’s Department of Education granted permission for Masimasi Primary School to be registered as an education institution.

The school was officially opened by the then Education CEO, Mr Gopalan, in 1970 although it was established in 1969.

The school catered for classes one to eight and the first headteacher was Master Ram Sharan.

“A lot of the school’s history is interlinked with that of the Hindu Maha Sabha Shree Maha Ganesh Temple.”

Mr Kissun said the story about how the first school quarters was built was a tale in itself.

“After the completion of the school, a headteacher’s quarters became the next focus.

“It was also built by the members of the community a year later.

“The quarters was in its final phase of construction when it was damaged in a freak road accident due to reckless driving by the school manager’s son-in-law. He failed to negotiate a sharp bend and ploughed straight into the quarters.

“At that time, there were no fences erected around the school compound.

“Luckily, there was no one inside the house.

“Money was disbursed by Mr Dayal and the necessary repair works were carried out and another teacher’s quarters was built in 1980.”

Masimasi Primary School was not spared the wrath of mother nature as hurricanes Eric and Nigel in 1985 caused considerable structural damage.

“The whole roof of the school building was blown away by the destructive hurricane winds. However, this did not deter the devotion and affection of the public towards the school and they came out even stronger and rebuilt the school.

“Students were levied fees of five dollars per term to boost the school’s coffers. The money from the school canteen was also directed to the school fund to facilitate the necessary maintenance works and the purchase of school stationery like chalk, plasticine, blackboards, dusters, etc.

“Groceries bought for the canteen were donated by generous members of the public.

“Masimasi Primary School had a school roll of 300 plus students at that time.

“The school catered for children of all religious beliefs and backgrounds. There was no segregation. The school’s management and headteacher worked in tandem with each other in unity.

“All the necessary stationery and school books were purchased from Government Supplies which gave us discounted prices. The money was sourced from the school fund and there was nil government assistance.

“Members of the community used to clean the school compound on the weekends and at that time, since there were no brush cutters and lawn mowers, the male folk used to cut the grass using cane knives.

“There was so much camaraderie during those times.

“Everyone did things from the heart because the sole reason was to ensure the children of Sabeto had a proper education, something that we did not have.”

Mr Kissun said the Maha Sabha Shree Maha Ganesh Temple and Masimasi Primary School still maintain the bells that were given in 1972 and 1999 respectively and they served as reminders of the unsung heroes, the ordinary folk of Sabeto, who worked hard at making the dream to have a school a reality.

Today, the temple and the school fall under the management of Masimasi Primary School.

They have both hosted a number of cultural programs in the past and plan to host bigger events in years to come.

The current headteacher Akashna Sharma said she was blessed to be at the school because of its close proximity to the temple.

“I am indeed honoured to be serving at Masimasi Primary School and blessed to be praying at the Lord Ganesh temple,” she said.

“The school has been providing students with stationery, bags and shoes with the kind assistance of donors and NGOs.

“This initiative was started off by the very first management when the school was established.

“Our school has a roll of 150 students which includes elementary child education.

“My students, teachers and I assist in the numerous temple functions and clean-ups.

“This year, we have elected temple prefects who are responsible for the opening and closing of the temple in case the school teachers are busy.

“As the head of school, I am trying to promote my school so that those who have left for greener pastures or have now grown old come back and see the changes that have taken place.

“Our unique icon is the Hindu Maha Sabha Shree Maha Ganesh Temple which is the first structure that comes into sight as you drive up the road.

“It is through the blessings of the Almighty and the goodwill from the members of the community that we continue to succeed and will continue to do so in the future.”