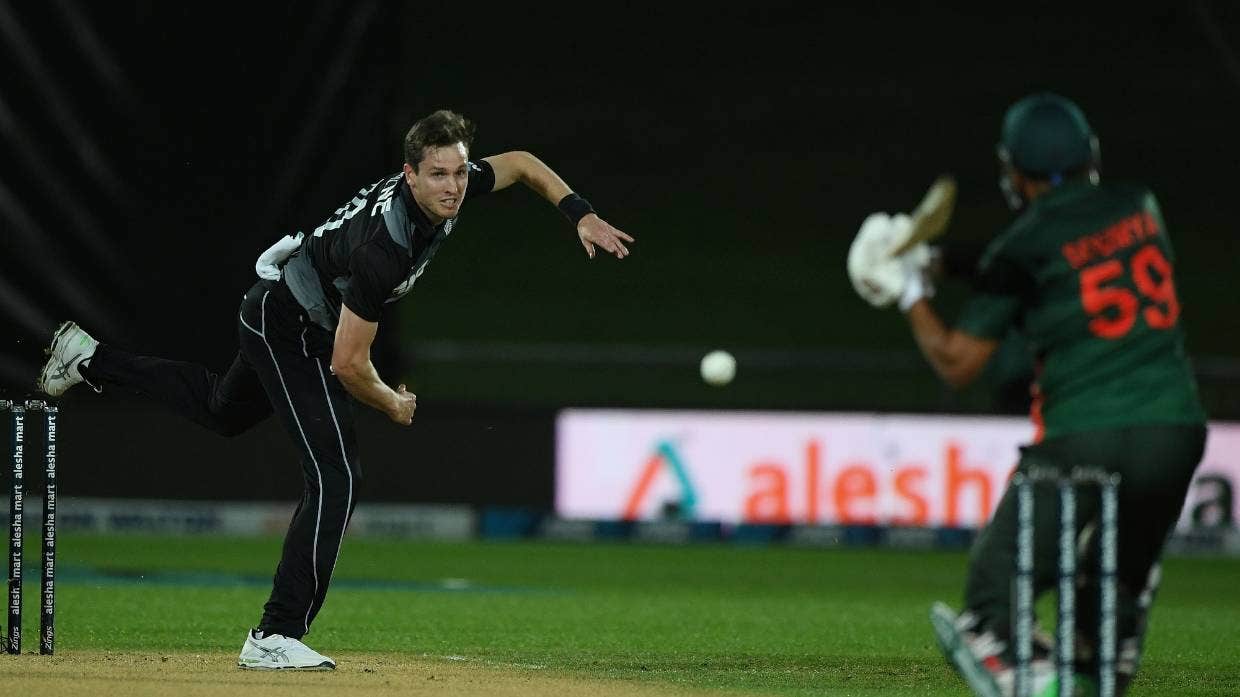 New Zealand will be without key quick bowler Lockie Ferguson for the entire Twenty20 World Cup.

Ferguson was ruled out of the tournament ahead of Wednesday morning’s (NZ time) opening game defeat by the Black Caps against Pakistan in Sharjah.

The pace bowler suffered a calf tear during training and has been replaced in the squad by fellow quick Adam Milne. New Zealand had been hoping Milne would have been available to play Pakistan, but the tournament’s Event Technical Committee didn’t approve Milne as a replacement until shortly after the encounter.

His absence was felt immediately as New Zealand were beaten by five wickets on Monday morning (NZ time).

“Lockie is a world-class T20 cricketer, so naturally a big loss for us,” Black Caps captain Kane Williamson said shortly after the loss.

“On that surface as well – he’s played a lot on it with KKR, so that was quite unfortunate. And obviously not being able to replace him with Adam Milne, who’s now coming into the side at some point when that’s allowed.”

Milne, who has played 40 ODIs and 23 T20Is, was a reserve as per the allowance for teams to travel with extra players in view of Covid-19 quarantine requirements.

“It’s a real shame for Lockie to have this happen on the eve of the tournament and the entire team is really feeling for him right now,” coach Gary Stead said.

“He’s a massive part of our T20 side and has been in such good form – so to lose him at this time is a blow. However, we are fortunate to have a like for like replacement in the form of Adam Milne who has been with the squad training for the past two weeks.”

There is also an injury concern for opener Martin Guptill, who limped off in the field after being struck on the big toe of his left foot by a yorker the ball before his dismissal, and may be in doubt to face India in a must-win game on Monday.

Ferguson had been in good form throughout the IPL with his Kolkata Knight Riders side and his impact with the ball was missed by New Zealand in the latter overs of Pakistan’s run-chase as Asif Ali and Shoaib Malik took to Tim Southee, Mitchell Santner and Trent Boult in the latter stages.

Milne impressed during last summer’s Big Bash League and also excelled in The Hundred in England before playing three matches for the Mumbai Indians in the IPL.