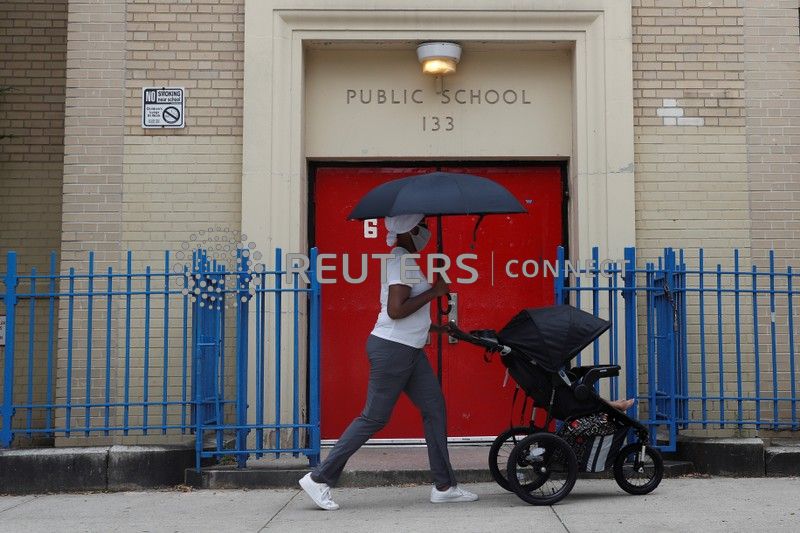 A woman pushes a baby in a cart past the entrance to Public School 133 in the Harlem neighborhood of the Manhattan borough of New York City, New York, U.S., July 8, 2020. REUTERS/Shannon Stapleton

NEW YORK (Reuters) – New York City Mayor Bill de Blasio on Wednesday unveiled a plan for reopening the country’s largest school system in September with a “blended learning” schedule that would have students alternating between classrooms and their homes.

Under the plan, which requires state approval, 1.1 million public school students would spend two days at school and three learning at home, and then reversing the sequence in the following week. The scheme is designed to limit the number of students and teachers in school buildings to prevent spreading the coronavirus.

“This blended model, this kind of split schedule model, is what we can do under current conditions,” the Democratic mayor said. “And then let’s hope and pray science helps us out with a vaccine, with a cure or treatment.”

De Blasio outlined the plan after President Donald Trump earlier this week criticized recommendations by the U.S. Centers for Disease Control and Prevention on reopening schools as too expensive and impractical.

The Republican president, who is seeking re-election in November, accused Democrats of wanting to keep schools shut for political reasons and threatened to cut off federal funding to schools that do not reopen, despite a surge in coronavirus cases.

The current CDC recommendations include testing for COVID-19, dividing students into small groups, spacing out seats at least six feet apart and putting up sneeze guards and partitions when social distancing is not possible.

Trump underscored his position on Monday in Twitter message written in all capital letters: “SCHOOLS MUST OPEN IN THE FALL!!”

Education Secretary Betsy DeVos echoed the sentiment at a White House briefing on Wednesday, saying, “It’s not a matter of if schools should reopen, it’s simply a matter of how.”

The New York plan calls for school buildings to be regularly sanitized and for students to wear face coverings and maintain social distancing while in the buildings, de Blasio said. Parents with safety concerns may keep children home to take classes online and with other materials, he said.

Teachers generally support the plan, said Michael Mulgrew, president of the United Federation of Teachers union, which represents 133,000 teachers and staff. He said it was a first step that still lacks many details.

Issues still on the table include diagnostic testing of staff and students, contact tracing of students who test positive for the coronavirus, adequate nursing staff and childcare for students not in class, Mulgrew said.

“Now that we’re really getting into how to make each and every building safe, we’re making a lot more progress,” he said. “But it’s going to be a long, long summer.”

Nearly all states are now considering reopening plans after closing their schools buildings in March as the pandemic forced them to switch to some form of remote instruction that usually relied on online connections.

The safety challenge of reopening schools in New York City is far less daunting than for officials in states with rapidly spreading infections. In Arizona, for example, positive rates averaged 26% last week, compared with about 1% in New York, the onetime epicentre of the pandemic.

New York Governor Andrew Cuomo said a decision on the reopening plan would be made in August.