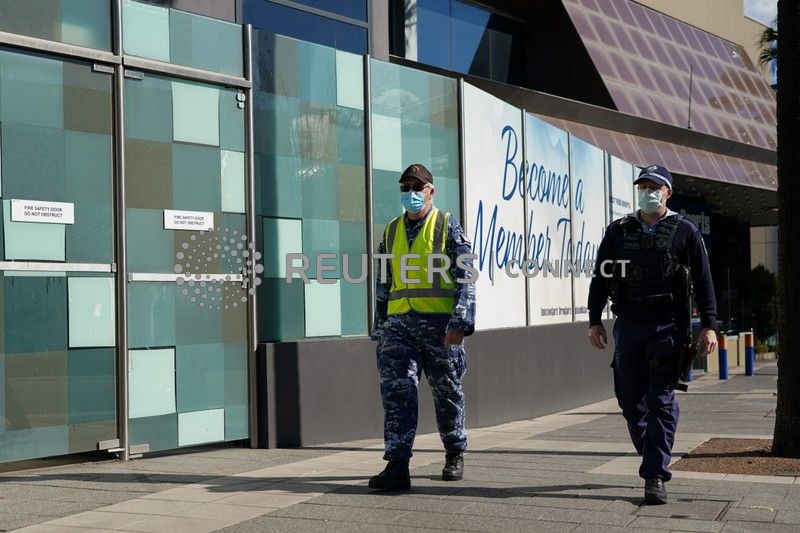 FILE PHOTO: Personnel from the Australian Defence Force and New South Wales Police Force patrol a street in the Bankstown suburb during an extended lockdown to curb the spread of the coronavirus disease (COVID-19) in Sydney, Australia, August 3, 2021. REUTERS/Loren Elliott

SYDNEY (Reuters) -Sydney reported a record daily number of new coronavirus cases on Thursday and the state of Victoria announced a one-week lockdown as Australia tried to contain the highly infectious Delta variant.

With around 35,200 COVID-19 cases and 932 deaths, Australia has avoided the high caseloads of other developed countries but its vaccination figures are among the lowest, with only 20% of people aged over 16 fully vaccinated.

The government is also under pressure as Australia’s A$2 trillion ($1.5 trillion) economy is threatened by a second recession in two years.

Sydney, Australia’s largest city and the capital of New South Wales state, is nearing the seventh week of a nine-week lockdown. It reported five deaths and a record 262 infections in the past 24 hours.

“Nothing about this is optional. This is a lockdown, it will be enforced, for the best of reasons and the best purposes, to bring these case numbers down, under control so we can once again be open,” Victoria state Premier Daniel Andrews told reporters in Melbourne.

Australia’s three most populous cities – Sydney, Melbourne and Brisbane – are all in lockdown. The Hunter region in New South Wales will also be locked down from Thursday evening after six new infections there.

Four of the five people who died of COVID-19 in Sydney were unvaccinated. The other had received one dose, state health officials said.

Many people remain wary of taking the AstraZeneca vaccine after a small number of cases of a rare blood-clotting disorder were reported among people who received it — including a new case, that of a 34-year-old woman from New South Wales.

Many people want to wait for more supplies of the Pfizer vaccine to arrive next month, when Australia expects to allow people under 40 to register to be inoculated.

Health experts expect Australia to endure stop-and-start lockdowns until it reaches a high vaccination rate but lawmakers face demands to ease restrictions for those unable to work.

“I’m a fortunate one to be in essential service, so I’m still working, still getting paid. For other people it’s a mixed bag. Some people are taking it really well and others not so well,” said Keirom O’Donoughue, a pharmacy salesperson in Sydney.