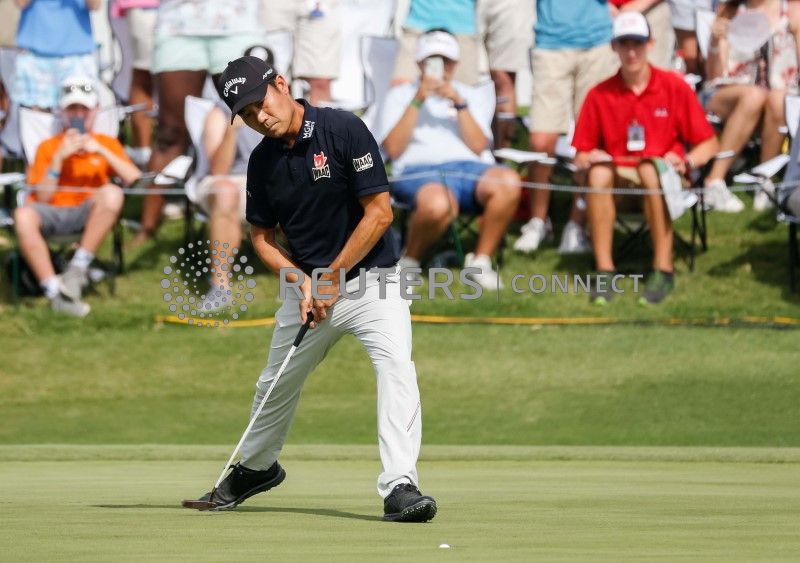 (Reuters) – Kevin Na figured it was time to add his name to the wall of champions at Colonial Country Club and, making birdies early and late, made the thought come true with a four-stroke victory over Tony Finau in the Charles Schwab Challenge in Texas on Sunday.

The South Korean-born American rattled off four birdies in his first eight holes, then after Finau pulled within two shots, Na sank two more birdies, including one at the last, to shoot a four-under-par 66 at the Fort Worth layout where he has often had low rounds but never won.

“When I was standing on the first tee, I looked at that wall (of champions) and in my head I engraved my name on it,” Na told reporters after the victory, his third on the PGA Tour.

His winning score of 13-under 267 included a near-course record 62 on Friday as he joined Ben Hogan, Sam Snead, Arnold Palmer, Jack Nicklaus and Lee Trevino as winners at Colonial.

“I knew before my career was over I was definitely going to win out here, if not multiple times,” Na said.

“It’s nice to get one, and who knows, maybe I’ll win a couple more times before my career is over here.”

Finau (68) needed a birdie at the last to finish at nine-under with Andrew Putnam (66) and Taiwan’s Pan Cheng-tsung (69) tied for third at eight-under.

Jonas Blixt rebounded from a disappointing third round to take fifth on seven-under as the Swede shot 68.

Hometown favourite Jordan Spieth went in the opposite direction as his putting deserted him, leading to a two-over 72 that left him eight strokes behind Na.

The former champion missed a 12-footer for birdie at the first hole and then bogeyed the second as his tee shot went into a fairway bunker.

He did not make a birdie until the last hole.

“I just misread a number of putts today just by half a cup,” said Spieth, who was off target on the lengthy putts he had made in the first three rounds.

Defending champion Justin Rose finished at five-over with a 70.