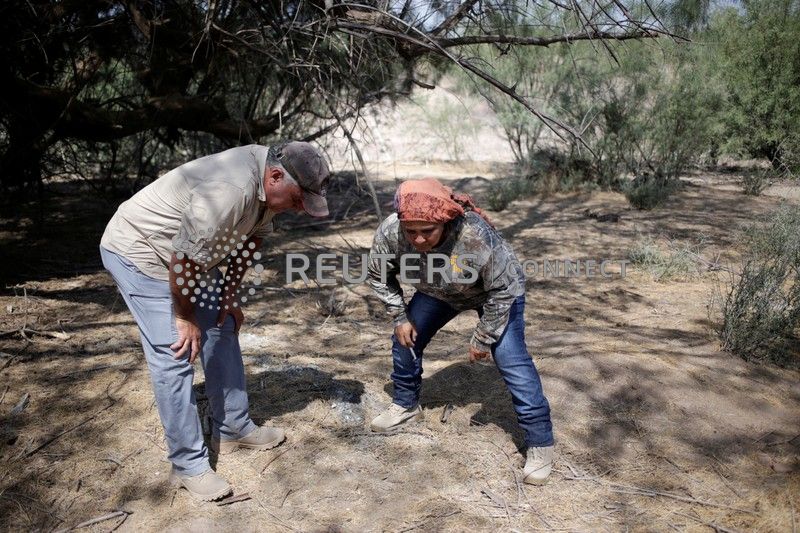 Silvia Ortiz and Oscar Sanchez, members of 'Grupo Vida', which recently opened a tortilla factory to cover the operating costs of their community-led forensic digs, take part in a search for human remains at a plot in the municipality of San Pedro, Mexico August 19, 2019. REUTERS/Daniel Becerril

Ortiz belongs to a group of families working to uncover graves of some of the 40,000 people who have gone missing in mounting lawlessness since the government sent in the armed forces to tackle Mexico’s drug cartels at the end of 2006.

More than 200,000 people have been killed in the violence since then, and shedding light on the fate of the disappeared is one of the toughest challenges facing the administration of President Andres Manuel Lopez Obrador.

Criminal gangs often bury the bodies of victims in clandestine graves. Some have been known to try to minimize evidence by dismembering or dousing them in acid.

Meanwhile, Mexican criminal investigators and forensic teams have struggled to keep up with the increased workload during the surge in killings. Fear of reprisals at the hands of perpetrators can also impede efforts to identify victims.

Decked out in surgical masks and sun hats, Ortiz’s collective – Grupo Vida or “Life Group” – keeps up a near-constant digging operation around the city of Torreon in the state of Coahuila.

The volunteer association made up of relatives of local missing people set out six years ago to uncover clandestine graves, saying government officials were not trying hard enough to find or identify human remains.

“This is why we say we’re facing a forensic emergency,” said Ortiz, sitting at home with her husband, Oscar Sanchez, surrounded by framed photos of their daughter Silvia Stephanie Sanchez before she disappeared in 2004, aged 16.

She has not been heard from since.

Jose Angel Herrera, Coahuila’s special prosecutor for disappeared people, said authorities are cooperating with Grupo Vida in the area around Torreon and conducting their own missions in other parts of the state.

In Coahuila, 2,144 people reported missing have never been found, Herrera said. Many disappeared while the territory was ravaged by the Zetas, a notoriously brutal drug cartel.

The state has identified the remains of 235 missing people through digs, including those led by Grupo Vida.

The group works for a week at a time, and many members struggle to keep their jobs during digs, Ortiz said.

Two weeks ago, Grupo Vida opened a tortilleria, launched with a grant from the American Jewish World Service, a non-profit group. They hope money from the enterprise can cover the operating costs of their community-led forensic digs.

Grupo Vida said since 2013 it has uncovered 27 sites with human remains, 10 full skeletons and hundreds of thousands of bone fragments, enabling over 100 disappeared to be identified.

Lopez Obrador has vowed to identify thousands of human remains in morgues and mass graves around the country, which he has called the “worst legacy” of past governments.

Members of Grupo Vida have yet to feel the benefits of his pledge, according to Ortiz, who said the result has been “working groups and photos, no real action on the searches.”

Still, prosecutor Herrera said the new administration helped fund construction of a centre that will work to establish the identities of the state’s backlog of human remains.

Regardless of the adversity, Ortiz said she would continue the search “until the last person is found.”