Merkel admits differences with Macron, says they agree on fundamentals 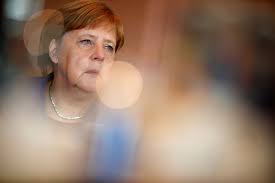 BERLIN (Reuters) – German Chancellor Angela Merkel said she and French President Emmanuel Macron have “intense debates” and think differently but can still find compromises, insisting that they are able to drive the European Union forward.

Macron, seeking to breathe life into the European Union as growing euroskeptic nationalism tests the bloc’s cohesion, has made euro zone reform a priority but Merkel has resisted some of his ideas, especially those that may expose Berlin to more risk.

“Certainly, we have intense debates. Our mentalities do differ in certain respects, and we to some extent view our roles differently,” Merkel told German daily Sueddeutsche Zeitung.

“However, despite our different situations and perspectives, we do reach compromises time and again. In this way, we’ve achieved, and continue to achieve, a lot for the European project,” she added. “We have the same general ideas.”

In January, the two leaders signed a new treaty to update their 1963 post-war reconciliation accord, but some analysts doubt they can still lead an EU that has grown to 28 members with diverse and often conflicting interests and priorities.

Turning to this month’s European Parliament elections, Merkel said: “Many people are concerned about Europe – including myself. This means I feel even more duty-bound to join others in making sure that Europe has a future.”

Merkel said she supported German conservative Manfred Weber in his quest to become the next president of the European Commission, adding: “That does not mean Germany has no other excellent candidates for other positions.”

In separate remarks at a foreign policy lecture on Wednesday, Merkel said she was pleased Britain wanted to remain involved in European security policy despite its planned exit from the EU.

“Wherever Britain is ready to cooperate, we should take the outstretched hand – that will make us stronger,” she told an audience in Ravensburg, in southwestern Germany.

To France’s irritation, Germany decided unilaterally last October – after the murder of Saudi journalist Jamal Khashoggi in Istanbul – to suspend arms sales to Saudi Arabia, its second largest market in the world after Algeria.

“So here we, Germany, will have to be more ready to compromise to be considered at all as a partner,” Merkel said.