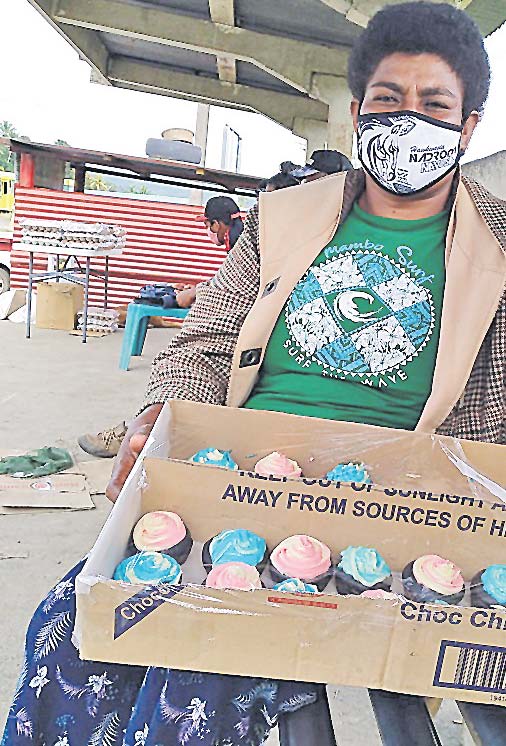 Joana at the Sawani border before it was reopened. Picture: VILIAME RAVAI

During the national border lockdown amid the second wave of COVID-19 that devastated the Fijian economy, the Sawani border became the new hub for market business.

A location that connected farmers from the highlands and buyers from the urban dwelling within the Central Division.

Over the weeks a new market was established on the roadside and literally just metres away from the Sawani police post.

Mother of five children Joana Marou said after she saw the opportunity to do business she called her daughter to bake cupcakes for the ‘early-bird’ villagers who arrived at 4am and waited for customers to arrive.

Ms Marou too had been stuck behind the border.

She is originally from Vatubalavu, Navosa and her husband is from Nabukunivatu Village in the interior of the Wainimala district.

Jonana said she was desperate to pay for a loan so she opted to sell something at the border.

“Through my small business at the Sawani border, I was able to keep up with my payments to the South Pacific Business Development.

“I usually sell kava and fresh produce at the Suva Municipal Market to make ends meet but when the border was put up I opted to do something different because there were farmers and vendors selling the same produce at the Sawani border.

“So I thought to make a quick snack for those early birds. I came to the border every week on Thursdays and Fridays to sell cupcakes.

The 42-year-old said her business pickup as she had expected and most of her cupcakes were bought by villagers and vendors.

“I noticed that majority of people occupying the border daily were adults so I thought cupcakes would be easy and light to carry and eat.

“I made a deal with my daughter living in Suva to bake the cupcakes. She sold them to me and I sold them at the border.”

Mr Marou said she knew the routine of farmers and vendors who would sometimes go with an empty stomach just to get the job done.

“I paid $12 for my fare down to the border another $12 for the return fare back home in the afternoon. I can’t just wait here at home in the highlands and see what my husband could get for us. That’s another reason I began this business.”

Joana said she also sold pure perfume at the Sawani and continued to do her part to help her husband.

The former Navosa Central College student said the first six dozens would fly really fast and people were always waiting for her at Sawani.

“When my husband sells dalo, tavioka and yaqona, I sell my cupcakes. The life in Wainimala is really good for me because water is free and electricity is cheap – and we eat mostly from our family farm.

“I’m one of the women in Wainimala that has joined the South Pacific Business Development and this is my fifth year. It has taught me to spend money wisely and to make a budget.

“I came from the interior of Navosa province but the lives are the same, we both rely on horses as our mode of transportation from the highlands to the urban centres.

“I want to tell the women during this lockdown that we can help our family in any way to earn money to survive.”