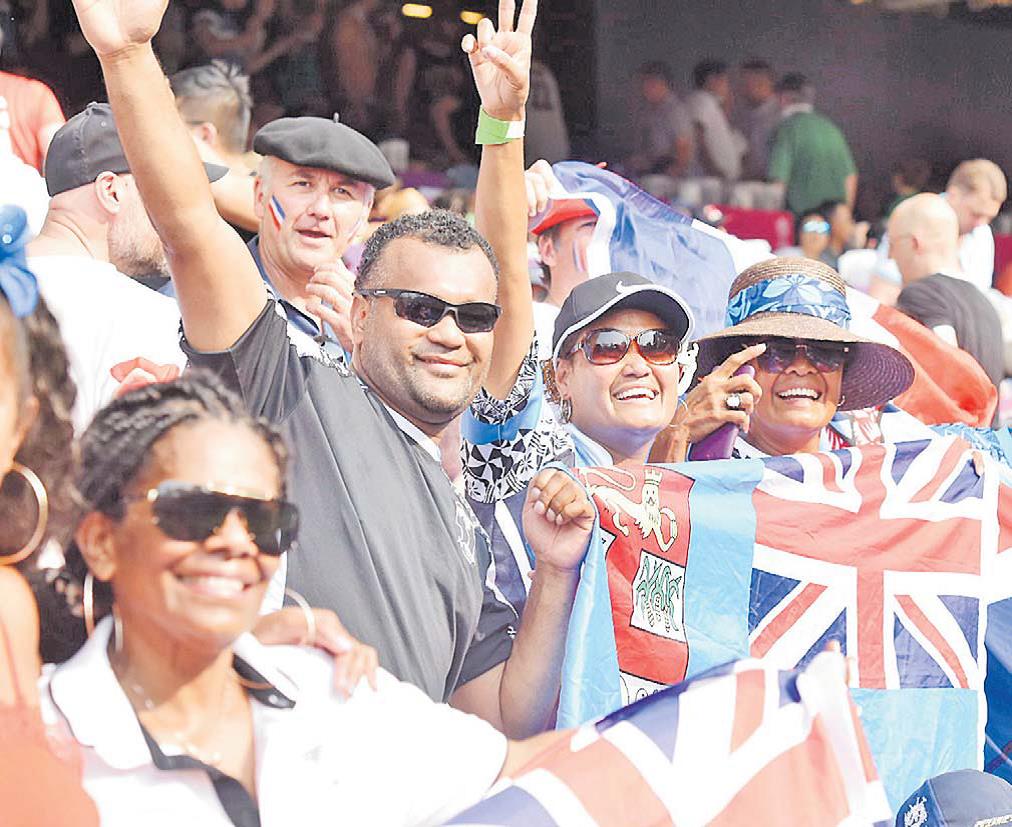 Our Fiji flag still flies high thanks to the sevens heroes for putting a sterling performance in Hong Kong. Super excellent delivery by the boys and team Fiji moves to the second spot in the series. Currently, team USA leads the series and we are following them very closely. We hope that our Viti Boys continue demolishing their opponents as they did in Hong Kong and win the series. As it stands now, things look pretty positive for our boys. Last three tournaments are left to be played and next, it is Singapore followed by London and Paris. Between the USA and Fiji, there is a difference of seven points only. Team USA has 130 while Fiji 123 points. I think Fiji will win the series and why not because we are the only team to win the Hong Kong five times in a row. My best wishes to the Fiji team. Go Fiji, go. Suresh Chand Nadi

I remembered when e-ticketing was first introduced, while there were many teething issues about its introduction into the system, however, I raised my analysis on why such a new system was introduced and it was published in this column about two years ago. My analysis when the e-ticketing was introduced was more into the why question especially when bus companies were running well, there was no problem for the people paying cash as they enter, and yet here we introduced the e-ticketing system which I believe was without proper consultation. I actually highlighted in my letter then that introducing the e-ticketing system was the first step of trying to achieve a long-term goal and that was for all public transport in Fiji to be controlled by Government which was a trend in developed nations. It is of course a great source of revenue I believe, very attractive. Nobody seems to listen, especially the bus companies’ owners, to what I was raising then, however, since now many companies are complaining that their businesses are unstable because the cost of running buses have exceeded the income being generated, as highlighted in the FT 10/04, I am not surprised. Kositatino Tikomaibolatagane Vuninokonoko Rd, Navua

My eight-year-old goes to a Christian private school. The school is not deemed Christian because it is run by a Christian organisation. It’s classified Christian because of the curriculum. It is based on the Accelerated Christian Education system which requires to some extent that the person supervising the child in school has some knowledge of the Bible. With the Catholic Church and SDA insisting that their teachers be of their respective faiths, I am wondering if this is a requirement because of what the children are taught and therefore requires that a teacher have knowledge of what they are teaching? If they are using the curriculum that was developed by the Ministry of Education then is threatening civil disobedience or for that matter closing down a school justified? They own the schools so they have the right to make demands but I believe it does bring into question the intentions and priorities of these organisations. If they believe that what they have has been provided by God and they are stewards of his provisions, then are they managing it the way He would have wanted? I believe this is the problem with ideology. Instead of serving people I believe some of us get too caught up in serving ideology. This is why I feel very strongly that organised religion doesn’t have much to do with God. In fact I believe in most cases organised religion is what stands in the way of a person’s relationship with God. Shiri Ram Suva

The open letter by Opposition parliamentarian Lenora Qereqeretabua to the Crown Prince of Norway, Prince Haakon Magnus (FT 09/04), is not only inappropriate but unprofessional and undignified. As an iTaukei I believe she certainly shows disrespect to the Crown Prince and to the Government of the day. As a parliamentarian we would expect you to raise the issues you wrote about with the appropriate ministries, or even better, with the Prime Minster himself. Why bother the Crown Prince for he cannot do anything about it? It is the very government that you are a part of that needs to deal with the issues you’ve raised. You are in a position to sort out those issues in a diplomatic manner, yet you choose to deal with it in a rather indiscreet and tactless way. It certainly will not help your political career nor put you in a healthy relationship with the ruling party. You are expected to be better than this! SIMON HAZELMAN, Rava Estate, Savusavu

The win in Hong Kong is hard to forget. I have been watching the replay and cheering with the same spirit that I did in front of my TV screen on Sunday night. Our boys soared with pride as they walked on to the podium for the fifth time in a row and declared themselves the undisputed Kings of HK. The peace surrounding Sunday night was disturbed with the burst of firecrackers but I don’t think anyone would have felt the noise as it electrified emotions back at home. Kava flowed freely into the early hours of Monday morning. Fiji’s incredible win and 31-match unbeaten run at So Ko Po united fans who danced, clapped and cheered their hearts out. HK is close to every Fijian and we can lose anywhere but a win in HK is a win everywhere and this is the love that we have for a tournament that is played on our spiritual home. Young guns Derenalagi, Tuimaba, Botitu and Teri stood the test of character and passed with flying colours and these players have a decorated career ahead of them. Fiji is 2nd on the overall points table and a win this weekend will all but seal our status as top contenders for the series title, our last win dating back to 2016. I’m hungry to see our boys repeat the performance delivered in HK and I’m sure that they are going to put up a valiant fight. Toso Viti! Rajnesh Ishwar Lingam Nadawa, Nasinu

The Fiji Times (April 8) had a historical piece by Sikeli Qounadovu on our participation at the Hong Kong 7s tournament. It was a very well-researched and factual piece that was both refreshing and assuring in its attention to detail and frills-free focus on facts. Qounadovu did not miss out any of the key people who contributed to our phenomenal presence at Happy Valley since our first victory in 1977. Of course, space constraints would have prevented him from naming all our players during the 3-peats, triumphs and the rises after unexpected falls at the same hunting ground. Perhaps the most spectacular smash was in 1984 after we had lost to South Korea in 1979 and won in 1980 when key nations did not send national teams. In 1984, the Hyatt Regency team (now Ratu Filise) caused a huge upset by conquering all at the National Stadium. Their coach, Ian Duncan, hauled in Etuate Gusuivalu (Honda) and went on to paste So Kon Po with our national team. All hail Fiji! Subhash Appana Suva

To our gallant gladiators from a record five in-a-row HK7s Cup victory, we, proud Fijians humble ourselves to thank you all for a sterling performance against numerous odds in the mights of Kenya, Australia, New Zealand, Argentina, USA and France all in one history-making So Kon Po weekend. “Vina du riki vu mutou na saravou ena waqe qaqa rakavi vitu.” Please do your utmost best to play good, clean, robust, open-running Fijian rugby as you take on each opposing team, one at a time. Play as one good unit. Avoid all yellow and red cards. Play to the rule. Trust your captain and each other. We join each one of you to thank the Lord our God for all prayers answered for a successful Hong Kong outing. Thank you Lord — prayers answered. Almost every Fijian on Earth will offer a prayer for you in Singapore this weekend. Do your very best. We cannot ask for more. Toso Viti toso. Ronnie Chang Nadi

I would like to apologise to the Fiji sevens coach Gareth Baber for writing “The Greatest Baba is Gareth Baber” on Facebook. I am really sorry. Baba in Indian means a Guru or a teacher and I had no intension of spoiling your name. I hope your contract will be renewed and you can stay here as long as you like. Sukha Singh Labasa

While the public will patiently appreciate the purpose of police roadblocks, it becomes frustrating when it gets prolonged. Especially during peak hours. Mohammed Imraz Janif Natabua, Lautoka

I believe the payment of consultation fees to private doctors is not going to reduce the burden on the public health system. People do not visit doctors for consultation purpose only but also for treatment. Once the consultation part is done, because of affordability issues, people will go back to the government hospitals for treatment. By the way, it is neither free nor paid by the Government. When the scheme eventuates, I believe it will be funded by the employers of Fiji. Mohammed Imraz Janif Natabua, Lautoka

Fiji is placed in another pool of death this week. Let Psalms 23:4 be your guide boys: “Yea, though I walk through the valley of the shadow of death, I will fear no evil: for thou art with me; thy rod and thy staff they comfort me”. Give them all another big “kiss of death”. Go Fiji, go. Kelera Talebulamai Naitasiri

Wouldn’t it be ironic if the refined white sugar that we are consuming here is the result of refining the brown sugar that we exported? Edward Blakelock Admiral Circle, Pacific Harbour || april11lekap9 || I like to apologise to the Fiji sevens coach Garet