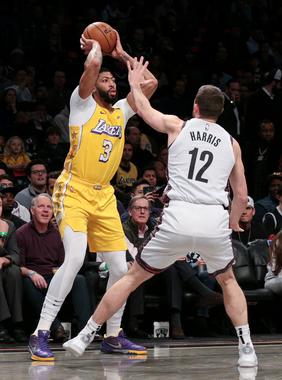 LeBron James totaled 27 points, 12 rebounds and 10 assists as the Los Angeles Lakers pulled away in the fourth quarter for a 128-113 victory over the struggling Brooklyn Nets Thursday night in New York.

James posted his 91st career triple-double and 10th this season as the Lakers and won for the 12th time in 14 games in front of a crowd that featured former President Bill Clinton and many Los Angeles fans. James exited to a standing ovation from many fans after checking out for good with 4:42 remaining and the Lakers up 23.

James shot 11 of 19 from the floor as the Lakers shot 50 percent overall and hit a season-high 19 3-pointers.

James ended the game at 33,626 points, 17 behind Kobe Bryant for third on the all-time scoring list. His first chance at passing Bryant will be Saturday in Philadelphia.

Anthony Davis added 16 points and 11 rebounds to help the Lakers to a 52-41 rebounding margin. Kyle Kuzma also added 16 as the Lakers got 55 points from their bench.

Kyrie Irving scored 20 points but it was not enough as the Nets dropped their fifth straight game and fell to 2-12 in their last 14 games. Taurean Prince added 18 while Caris LeVert contributed 16 as the Nets shot 44 percent and lost despite hitting 21 3-pointers.

The Lakers settled for a 38-35 lead after shooting 58.3 percent in the first quarter and allowing the Nets to end the period on a 13-6 run over the final 2:33. The Lakers took the lead for good shortly after James returned in the second quarter, held a 75-70 lead by halftime and took an 88-75 lead after Green sank three 3-pointers in the first 3:58 of the third.