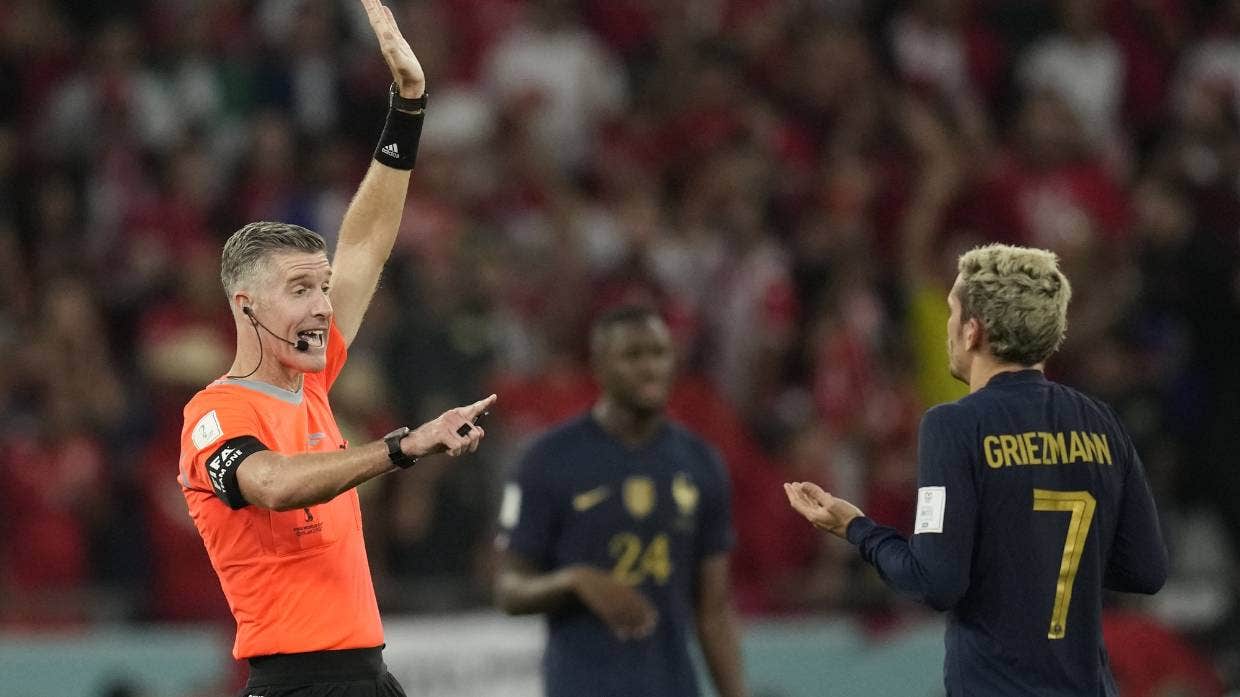 Kiwi referee Matthew Conger played a decisive role in Tunisia’s stunning 1-0 upset of France at the World Cup after controversially disallowing a late equaliser from the defending champions in Doha.

With Tunisia leading 1-0 deep into injury time thanks to Wahbi Khazri’s 58th-minute strike, a much-changed French team thought they had levelled when substitute Antonie Greizmann lashed home after a ball into the box fell to the Atlético Madrid forward.

But as the Tunisian players sunk to the turf in the belief that the final whistle had been blown, Conger – a schoolteacher from Palmerston North – ordered a VAR check for a potential offside.

After a brief look at the monitor, he disallowed Griezmann’s 98th-minute strike, much to the delight of the heavily pro-Tunisian crowd.

The North African side duly held on for the remaining seconds to record a famous victory over France.

However, it still wasn’t enough for Tunisia to advance to the knockout stages, after Australia stunned Denmark 1-0 in the other game to claim the second qualification spot in the group behind France.

Tunisia finished on four points after three matches, with France and Australia on six and Euro 2020 semifinals Denmark in last place on one point.

Montpellier winger Khazri ran at the heart of the French defence and beat two players before poking the ball into the bottom corner for the only goal of the game.

He fell to his knees and was mobbed by team-mates. When he got back up, he made a heart shape to the Tunisian fans behind the goal and then limped off, appearing to hurt himself as he fell when scoring his 25th international goal and his third at World Cups.

It was Tunisia’s third victory at a World Cup, and France’s first loss at the tournament since the 2014 quarterfinals, when Germany beat the team 1-0.

A few minutes after Khazri’s goal, a man ran onto the field at Education City Stadium with what appeared to be a Palestinian flag. He did some acrobatic jumps before six security officials dragged him off.

With France already qualified for the knockout stage, coach Didier Deschamps rested Griezmann, Kylian Mbappé and most of his regular starters. Only four of the team lining up at the beginning had even started a World Cup match before.

But Khazri’s goal prompted Deschamps to bring on Mbappé and Griezmann and the increased urgency almost led to an equaliser.

Deschamps had selected more of a “C” team than a “B” team. Randal Kolo Muani struggled to make an impact at centre forward and Kingsley Coman – who scored Bayern Munich’s winner in the 2020 Champions League final – was isolated.

France central defender Raphael Varane, however, mopped up on the occasions Tunisia got close to the penalty area in the first half.

With goalkeeper Hugo Lloris among the rested, 37-year-old Steve Mandanda played only the second World Cup match of his long career. The other was also in the team’s third group game four years ago.

Mandanda’s appearance means Lloris will have to wait a little longer to equal defender Lilian Thuram’s national record of 142 appearances. Lloris has made 141 appearances for Les Bleus.

Striker Olivier Giroud also has to be patient. He still has 51 goals, equal with Thierry Henry as France’s all-time leading scorer.