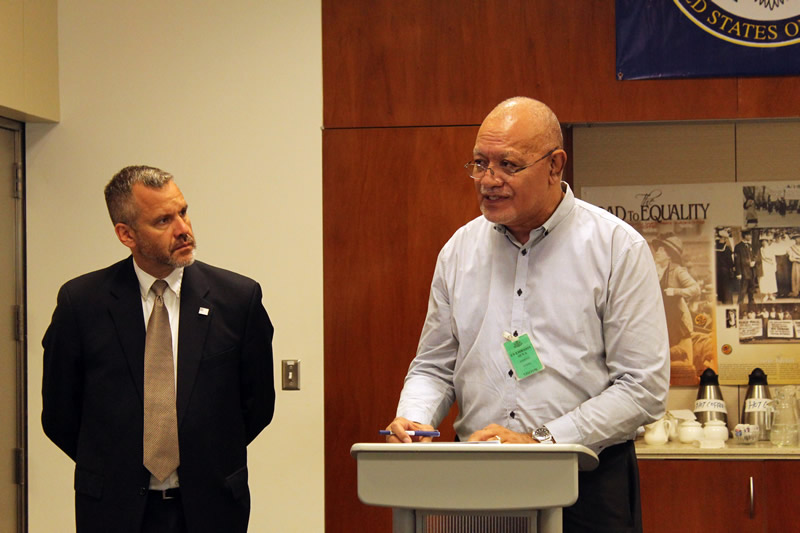 US ambassador Joseph Cella (left) and Dr Joji Malani at the US embassy in Suva. Picture: SUPPLIED

Up to 900 Fijians suffering late stage kidney problems are like prisoners facing death sentences — because Fiji is able to provide dialysis for only 10 per cent of its cases.

This, according to Kidney Foundation of Fiji director and Associate Professor of Medicine at Fiji National University, Dr Joji Malani.

He said the low dialysis issue was because there was “very little or no strong support from Government to subsidise costs”.

He made the comment during a zoom conference held at the United States Embassy in Suva yesterday.

Dr Malani was speaking with kidney experts from the US and Fiji at an event organised by US ambassador Joseph Cella.

The e-discussion was facilitated following a report from the American Society of Nephrology which said Fiji recorded an incidence rate of 938 per million population — the fourth highest leading cause of death in the world.

“And so far there has been very little or no strong support from Government to subsidise costs. “Help is coming in but it’s very slow and people are still dying.”

Dr Malani said 65 per cent of the kidney cases were diabetics with some suffering from hypertension and stone diseases.

He claimed the Health Ministry had failed in combatting non-communicable diseases (NCDs) because of the increase in cases.

“For the record, the health system has failed because NCDs kept on increasing despite a lot of awareness. “We need to re-look at how we are going to address the problem.”

Health Minister Dr Ifereimi Waqainabete said he would not comment on what Dr Malani said. “I won’t comment on that because I was not there and I did not hear what they said,” the minister said.

US ambassador Mr Cella said the US was trying to help Fiji’s health sector. “We are listening and helping them, building that bridge, thinking outside the box and turning challenges into opportunities,” he said.

“Kidney disease not only threatens lives, but also imposes a public health and financial burden.

“That’s why prevention, screening, and early intervention is so important.