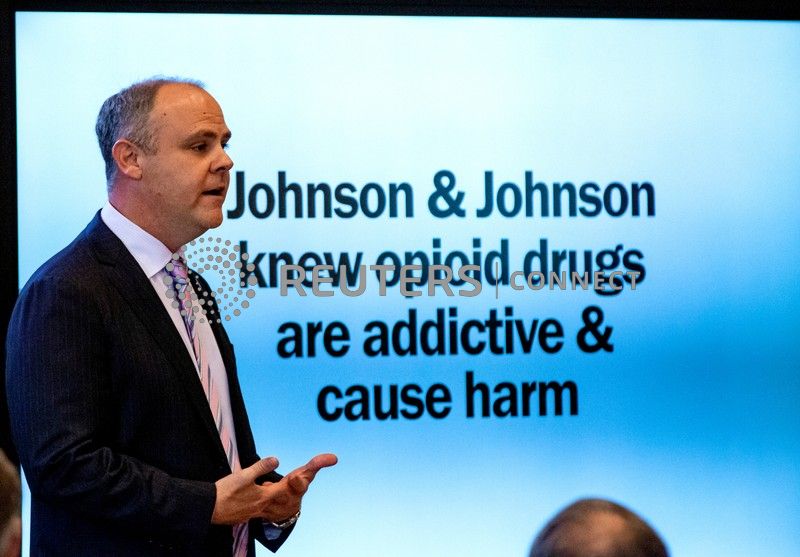 FILE PHOTO: State's attorney Brad Beckworth presents information in the opening statements during trial of Johnson & Johnson over claims they engaged in deceptive marketing that contributed to the national opioid epidemic at the Cleveland County Courthouse in Norman, Oklahoma, U.S. May 28, 2019. Chris Landsberger/Pool via REUTERS

J&J and its Janssen Pharmaceuticals affiliate were accused of targeting elderly patients for opioid treatment despite the risks of side effects such as falls, fractures and neuropsychiatric symptoms.

“Misrepresentation of opioids to consumers for profit is inexcusable,” Governor Andrew Cuomo said in a statement.

In a statement, J&J called its marketing and promotion of opioids “appropriate and responsible. Janssen provided these medicines for doctors treating patients suffering from pain and worked with regulators to provide appropriate information about their risks and benefits.”

The charges by New York’s Department of Financial Services are the fourth in its opioid industry probe, following charges against Teva Pharmaceutical Industries Ltd and Allergan Plc, Endo International Plc and Mallinckrodt Plc.

It is separately appealing a $465 million judgment in Oklahoma from last November over its opioid marketing there.

The state also said J&J’s “Norman Poppy,” developed in 1994, once accounted for as much as 80% of the global supply for oxycodone raw materials.

Oxycodone is the main ingredient in OxyContin, made by the now-bankrupt Purdue Pharma LP.

The U.S. Centers for Disease Control and Prevention has said opioids have contributed to more than 400,000 deaths since 1997.