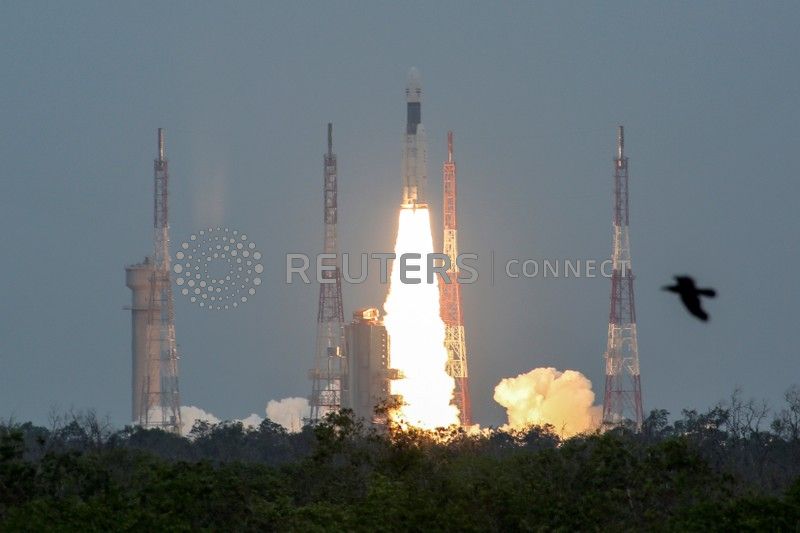 SRIHARIKOTA/BENGALURU, India (Reuters) – India launched a rocket into space on Monday in an attempt to safely land a rover on the moon, its most ambitious mission yet in the effort to establish itself as a low-cost space power.

If successful, the $146 million mission will allow Indian scientists to carry out studies on the presence of water at the moon’s south pole, unexplored by any other nation before.

“This mission will offer new knowledge about the Moon,” Prime Minister Narendra Modi tweeted, praising the scientists responsible for what he called a fully indigenous mission.

China, Russia and the United States are the only other nations to have sent missions to the moon.

A live broadcast showed images of the rocket, carrying the unmanned Chandrayaan-2 spacecraft, blasting off from a space centre in southern India as thousands of onlookers cheered the launch, which was delayed for a week by a technical snag.

The boosters separated safely as the craft began its nearly 50-day journey, after which the lander will attempt a controlled landing to deploy a rover at the moon’s south pole.

The next month and a half will see the spacecraft perform crucial manoeuvres to ensure a smooth landing, ISRO Chairman K. Sivan said, as the agency’s officials congratulated each other with handshakes and bear hugs after the launch.

“We are going to experience 15 minutes of terror, to ensure that the landing is done safely near the south pole,” he told reporters, describing the final moments before the craft is expected to touch down on the moon, about 47 days from now. Graphic: India to launch second lunar mission IMG, click https://tmsnrt.rs/2NX4ytg

The space agency has previously said the descent on the moon could be complex, with potential problems from variations in lunar gravity, terrain and dust having to be taken into account.

Globally, Chandrayaan-2, whose name means “moon vehicle” in Sanskrit, will be the year’s third bid at a moon landing, following China’s successful launch of a lunar probe and the Israeli Beresheet spacecraft, which failed and crashed on the moon in April. Graphic: Moon landings IMG, click https://tmsnrt.rs/32Jt6JJ

India’s space agency suspects the south pole region of the moon contains water in the form of ice as well as craters that could reveal fossilised information about the early solar system.

Last week saw the 50th anniversary of humankind’s first steps on the moon in 1969.

India has had a space programme for decades, and has for years carried out low-cost satellite launches for foreign commercial and government players as well as national programmes including missions to the Moon and Mars.

Modi’s nationalist government has in particular been active in advancing India’s space policy and projecting India as a space power. India’s 2019/20 budget for space research stood at 124.7 billion rupees ($1.81 billion), rising by some 75% since Modi came to power in 2014.

In March this year, India shot down one of its own satellites to demonstrate its anti-satellite weapon capabilities, with Modi making a public announcement of the event and hailing India’s arrival as a space power.

India has also announced plans for a manned space mission with a targeted flight in December 2021, besides proposing missions to study Venus and the sun, although some of these had been proposed before Modi came to power.

On Monday, Modi tweeted an image of himself following the Chandrayaan-2 event on a television screen and applauding the liftoff. “The launch of #Chandrayaan2 illustrates the prowess of our scientists and the determination of (1.3 billion) Indians to scale new frontiers of science,” he said.