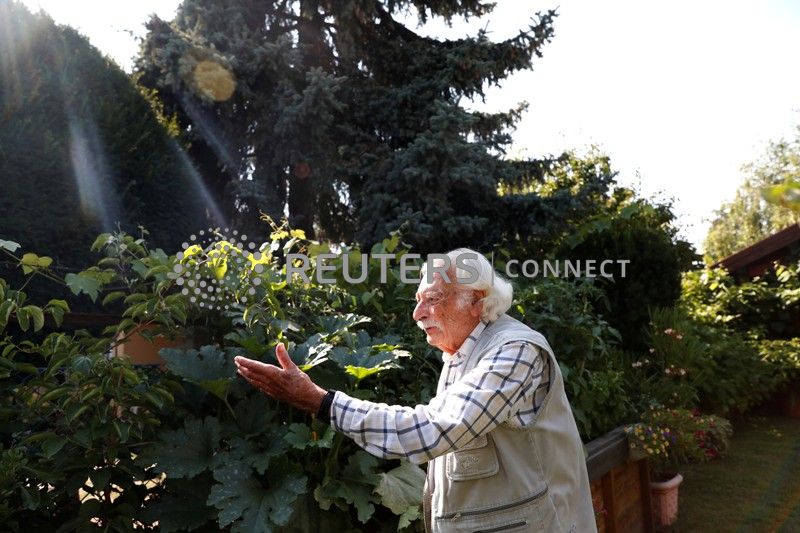 BUDAPEST (Reuters) – Gyorgy Balint, Hungary’s favourite gardener, turns 100 this month and his advice is more sought after than ever.

A TV and online celebrity who has been handing out tips on gardening since the 1960s, Balint says his closeness to nature has contributed to his longevity.

He begins each day answering queries from green-fingered fans on his website, and his 430,000 followers on Facebook, often helped by one of his six grandchildren as they sort out his mailbox, respond to messages and keep the website updated.

An author and editor of books and magazines on gardening, Balint also became a regular contributor to a popular Hungarian TV show between 1981 and 2009 and editor of another television programme on farming.

“Looking back 100 years, I can say that cultivating the land is the most wonderful job you can have,” he told Reuters, sitting on the veranda of his house in the Budapest suburbs, overlooking a neatly pruned garden where the cherry tree is almost the same age as he is.

“Modern societies should preserve a closeness to nature… people should be able to enjoy the shade a tree gives, or feel joy when a leander starts blooming.”

He encourages anyone with a garden, however small, to grow fruit and vegetables as well.

“Those who grow their own, also tend to eat more fruit and veggies,” he said.

In his own raised garden bed, he has a “tomato jungle”, courgettes and green peppers among other fruits and veg.

Balint is worried about climate change and believes the world should aim for self-sustaining communities as a rapidly growing population will need to be fed.

“Data shows that by 2050 the world’s population could grow to over 10 billion people, and these people need to be provided for,” he said.

Another secret to his long life is to always keep active.

He still helps people in Budapest to create community gardens and gives lectures, writes books and attends gardening shows and events around Hungary.

He plans to celebrate his 100th quietly with a meal at his favourite local restaurant with family, reflecting on a life that has endured very difficult experiences as well.

Balint, who is of Jewish heritage, was sent to a concentration camp in Austria in World War Two. He weighed 42 kilos when he escaped with a friend in 1945. Only one of his two sisters survived the Holocaust.

Gardening gives him purpose and a constant sense of achievement, he says.

“The secret is that there are many people who in their entire life have this genetically built-in need to work, that they have to do something useful,” he said.

“For a gardener, every day a flower blooms, a seed starts to grow, and a tomato ripens,” he says, with a big smile.